By News Staff on May 31, 2012 in Government Agencies/Utilities 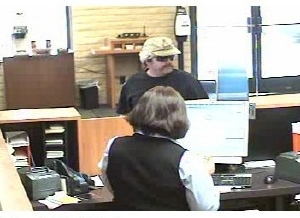 This clip from bank surveillance tape shows the suspect wearing the same hat found with remains near Benton.

On March 17, 2010, a man walked into Chase Bank in Bishop wearing dark glasses and a hat, and demanded cash.  Tellers said he had a gun.  Steven Wiswell of Benton became the suspect and disappeared in spite of police efforts to track him down.  Now, Mono Sheriff Officers say that they may have Wiswell’s remains.

Mono Sheriff’s Lieutenant Rob Weber confirmed that a man and woman on a walk in the Benton area near where Wiswell had lived found a skull and other human remains. They took photos with a cell phone. Lt. Weber said that a wallet belonging to Wiswell was found with the remains as was a hat that he appeared to be wearing in bank surveillance tape more than two years ago. Weber said Wiswell’s driver’s license was found in the wallet.

Lt. Weber said that the Sheriff’s Office does not have definite confirmation of Wiswell’s identification.  He said dental records and possibly DNA tests will be performed in coming days.

$545 was found in the wallet on scene.  Mono Sheriff’s officers will work to compare serial numbers with those on the money missing from Chase bank.  The robber in 2010 got away with a few thousand dollars.

Back in 2010 Bishop Police had issued a warrant for the then 49-year-old Wiswell’s arrest. At the time, then Bishop Police Chief Kathleen Sheehan had stated that several of Wiswell’s friends reported that he may have committed suicide.  Images on the Paiute Palace Casino surveillance tape the night of the bank robbery confirmed some suspicions about Wiswell.  All of his personal information became available because he used his Player’s Club Card.  His image also closely matched that of the robber on the bank video tape.

I always thought it was “even a blind hog will root up an acorn every now & then”. And, at least I’m not afraid to put my REAL name on my opinions. I could make up a B.S. moniker like you & badmouth everything that doesn’t agree with YOUR superior… Read more »

WOW !!!!…Finding his ID……and the hat he wore during the robbery….and if the serial numbers match up to the stolen loot…as well as DNA and dental records….sounds to me like case closed.

Predicted this 2 yrs. ago.There were some that chastised me for my un-caring comments, but at the time, I said “I call them as I see ’em”. For those non-believers, check the archives

If it is Steve Wiswell i pray that he has found some peace. He was a really nice guy caught up in some realty bad times in our country.And yes what he was accused of doing was wrong. .WE MISS SEEING YOU ON CLARK RANCH RD Steve.

Big Rick, more often than not you are dead wrong on your “calls” because you make them without any real information other than what you read on the internet.

Even a blind squirrel finds a nut once in a while.