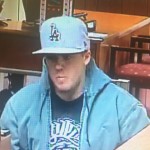 On Monday, August 26, 2013, at about 11 a.m., the Mammoth Lakes branch of the Bank of America was robbed by a male suspect who presented a note stating he had a gun and that it was a robbery. He fled before police arrived at the bank, but was later apprehended.

The follow-up investigation was led by Detective Doug Hornbeck. The bank provided surveillance photos to the MLPD and Hornbeck and other officers recognized that the suspect may be local resident they had dealt with in the past, Ryan Ward, age 30. A short time later, the MLPD received information that a suspect matching the description of the bank robber named Ryan Ward was staying at the Motel 6.

MLPD officers, assisted by deputies of the Mono County Sheriff’s Office, surrounded the room occupied by Ward. Telephone contact was made by Sergeant Marc Moscowitz and after about fifteen minutes of negotiation, Ward exited the motel room and surrendered peacefully. Ward was not armed at the time of his arrest.

Ward will be booked for bank robbery at Mono County Jail. The investigation is continuing to determine the amount taken in the robbery and its location.

Chief Dan Watson said, “One of the benefits of a small community is that the police know many people in town. That includes the criminal element. This local knowledge, coupled with a tip on his whereabouts, resulted in a quick apprehension.”

Chief Watson also acknowledged the investigative skills of Detective Hornbeck, the teamwork displayed by all personnel involved, and the excellent negotiation skills of Sergeant Moscowitz who very calmly convinced the suspect that he should surrender.

“This had a quick and peaceful resolution as a result of good police work.”

On Monday August 26, 2013 at about 11 a.m., the Mammoth Lakes Police Department responded to a robbery at the Bank of America on Laurel Mountain Rd in MammothLakes.

Upon arrival, officers learned that the suspect had already fled the scene, southbound on LaurelMountain, possibly on a bicycle.

The suspect displayed a note declaring a robbery and demanding money.  The note also indicated that he had a gun, although no weapons were seen.  The suspect obtained a yet to be disclosed amount of cash.  There were no injuries reported.

The suspect is described as a white male adult, about 30 years old, 5’8’ to 5’9, short hair.  The suspect has numerous colorful tattoos visible on both arms down to his hands and also on the left side of his neck.  He has lettering visible on all fingers.  The suspect’s clothing worn during the robbery was located in the Shady Rest tract, in the forest behind Center St. 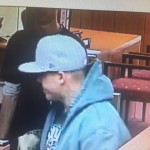 The suspect is still outstanding.  If anyone has information related to this case, please contact Detective Hornbeck at the Mammoth Lakes Police Department.  760 (934)-2011.

This is the second bank robbery this month in Mammoth Lakes. On Aug. 2, Union Bank was targeted. Two people were questioned but no arrests have been made in that incident.

Hopefully this will discourage some of the other half-wits out there from attempting a similar stunt.

Big Rick…..nope…..looks like a Mammoth Lakes local……(From Benett – edited out the rest because the man was arrested and not yet convicted.)

Benett….fair enough….but my guess is he’ll have one heck of a time explaining that surveillance tape he was caught on…a prosecutor’s dream come true !!

“Dude? everybody knows you here!”

Are you SURE he isn’t from Chalfant ? (PARODY…NOT TO BE TAKEN SERIOUSLY)!!!

Two thumbs down already on Sierra Lady’s post for congratulating and thanking people?

Wow. It appears some people just can’t take any joy or satisfaction from a job well done.

For the rest of us, let’s go back to enjoying our lives.

Way to go Hornbeck and Moscowitz! Thanks also to the Mono County Sheriff’s office for their help.

I’m pretty sure this bone head was caught breaking into Bishop High a few years back. Guess jail doesn’t bother him.

Do these nitwits actually think they will get away with robbing a bank? On a bicycle?
Hard to believe there are people among us that are that stupid. Sad if they are that desperate and/or addicted to drugs.
Maybe they’re just hungry and need a place to sleep.

“Hard to believe there are people among us that are that stupid.”

Dingo…..Problem is,it does seem to happen more than a few times…..was watching a story on “48 hour mystery” the other night about a guy on a bicycle that robbed an armored car driver,shot and killed the driver,took off on a bicycle,got away…..and that happened many years ago….and the guy is… Read more »

…Looks like Zack Greinke…the pitcher for the Los Angeles Dodgers…..hat and all…