First JC Penney packed up its Arizona jeans and left town, not it’s Bank of America.

KSRW got the same canned confirmation printed in The Sheet; the departure date is September 11. 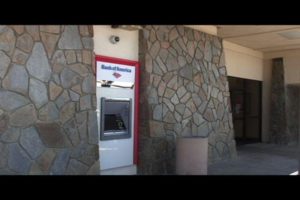 The reason: “changing needs and habits.” Conceding the decision was “a difficult one… driven primarily by changing banking behaviors as more clients overall have adopted our online and mobile banking offerings because of the convenience they provide.”

Tell that to Bishop Visitor Center host Chuck Kilpatrick who opened his first bank account in 1951, at BofA. It’s not hard to picture Kilpatrick trying to chat up an ATM, but he won’t get much of a conversation out of the machine.

The official statement provides some solace—“customers…can still access accounts” etc., etc. through mobile and online banking or at other locations.” That other location is in Ridgecrest, a two hour, 12 minute drive from Bishop.

As for current employees, corporate “will work to help place employees…in similar level roles within the company and offer severance for those eligible.” The bank’s regional representative couldn’t tell us how many locals work at the branch.

Between 2017 and 2018, BofA lowered its budget by 2.5 percent. From 2010 to 2017, the bank dropped 74,000 employees and reduced the number of branches by 27-percent. Then, oddly enough, a report by consumer advocate Clark Howard indicated BofA would add 500 branches over the next four years.

A 2017 report by J.D. Power didn’t pick up on the trend of online/mobile bank use. Seventy-one of bank customers surveyed for the report visited a branch an average of 14 times in 12 months.

Running those numbers by BofA probably won’t change the corporate mind. So, is the Owens Valley falling off the radar and is there any way to generate a more significant blip?

Bishop City Manager Jim Tatum may not have an immediate, fool-proof answer, but at least he makes you feel better.

“The community will have to pull together,” he said in a phone interview, “and figure out the needs; figure out what’s viable, what makes sense. We may end up looking completely different.”

The City Council started a dialogue with business and property owners earlier this year. Now, said Tatum, it’s time to listen to what people have to say and move forward.”

Some of the possibilities on the table are converting downtown commercial buildings to multi-use, including housing. Other viable options include gutting some of the larger retail buildings and leasing out spaces to small, start-up operations—like a business incubator.  Businesses evolve, Tatum said. Now Bishop has to figure out where that evolution is headed. “The onus is on the property owners,” he said. “It’s a tough problem, but you gotta believe” it’s solvable.

Tatum anticipates some movement in the next month or so. “We’re going to shake it up,” he said.