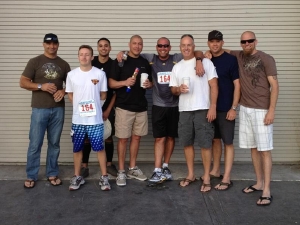 Six out of the twenty runners for Team Eastern Sierra.

Mammoth Police Chief Dan Watson passed along this news release on the Baker-to-Vegas Relay Team event.  Chief Watson said,  “I have nothing to add except congratulations to the runners for their commitment to physical fitness and esprit ‘d corps.  This year’s conditions were the hottest in memory.  I was part of the support team and drove the follow for the first five runners.  The follow vehicle’s outside thermometer showed a temperature of 123 degrees as we were going up Ibex Pass at about 4 pm on Saturday.  Fortunately, all of Team Eastern Sierra runners were well trained and hydrated and no one was injured.”

The Baker-to-Vegas Relay is the most “positive” event offered to law enforcement officers today.  It gives them a reason to maintain a physical fitness program so as to help them better perform their duties.  Over the 28 years the Baker to Vegas Relay has been run, nearly one hundred thousand law enforcement personnel have tread across the desert.  The original ideals of the race continue: teamwork, camaraderie, physical fitness and competition.

Today it is the largest law enforcement event of its kind in the World with teams participating from South Wales England, Calgary Canada, Hamburg Germany and teams from throughout the United States.

The race starts near Baker, CA and traverses the desert and mountains, non-stop for 120 miles, before it ends in Las Vegas.  There are 20 legs from 4.3 miles to over 10 miles with varying elevation changes.  The weather can change from one extreme to another as it normally does during spring.  This year was one of the hottest with the temperature near 102 degrees at the start.  It is a long and challenging experience.

Since 1999, law enforcement personnel serving in Inyo and Mono Counties have come together to form a team to participate in the annual event.  This year “Team Eastern Sierra” consisted of men and women from Mammoth Lakes Police Department, CHP-Bishop Area, CHP- Mammoth Lakes Resident Post, Inyo County Sheriff’s Office, Mono County Sheriff’s Office and the National Park Service- Death Valley.  The team improved from last year and placed 131 out of 280 teams with a time of 17 hours and 59 minutes.

Although the race is not a memorial run, many teams run in memory of their fallen brothers and sisters who paid the ultimate price while wearing the uniform.  This year, as in years past, Team Eastern Sierra ran in the memory of Paul Pino (CHP), Richard Perkins (Bishop P.D.) and Wayne Geiger (U.S. Army, son of Randy and Kim Geiger of the Inyo Co. Sheriff’s Office).

Congratulations. Just finishing a 120 mile run, relay or otherwise, in 100+ degrees is no small trick and to do so without injury is remarkable. Hope they kept the beer at the end passably cold.