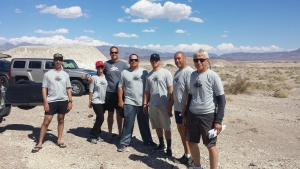 The starting point for the run is Baker, CA; runners traverse the desert and mountains non-stop for 120 miles, with an ending point of Las Vegas, NV.  There are 20 legs, from 4.0 miles to 10.7 miles, with varying elevation changes.  The relay began late in the morning of March 22nd, and ended early the morning of March 23rd.  As per the desert climate during the spring months, the weather can change from one extreme to another depending on the time of day.  Runners describe Baker to Vegas as long and challenging, but nonetheless a rewarding experience.

Although the race is not a memorial run, many teams run in memory those who paid the ultimate price while in uniform. Team Eastern Sierra continues to honor the memory of Paul Pino (CHP), Richard Perkins (Bishop P.D.), and Wayne Geiger (U.S. Army, son of Randy and Kim Geiger of the Inyo County Sheriff’s Office).

During this year’s 30th anniversary, Team Eastern Sierra bested last year’s run time by nearly 30 minutes, posting an actual run time of 17:51:51.  “Through dedication and hard work, the team came together for a safe and successful event,” stated Inyo County Sheriff’s Lieutenant Eric Pritchard.  Pritchard went on to say that, “without the support from our community and the hard work of team volunteers, this event would not be possible. Team Eastern Sierra is grateful for the support the community has shown over the years and for the dedication of the men and women of our law enforcement community.”

The Relay was founded by Los Angeles Police Officers Chuck Foote, and Larry Moore. Baker to Vegas is now considered the largest law enforcement event of its kind in the world with teams participating from Queensland Australia, South Wales England, Calgary Canada, and Berlin Germany as well as teams throughout the United States.  The original ideals of the race continue: teamwork, camaraderie, physical fitness and competition.

We work to provide daily news to all of the Eastern Sierra, in the tradition of Eastern Sierra News Service and the Sierra Wave. We bring you daily happenings, local politics, crime, government dealings and fun stuff. Please contact us.
View all posts by News Staff →
‘Falana’ graduates, by Gaasch
Farmers markets continue
6 Comments
Newest
Oldest Most Voted
Inline Feedbacks
View all comments

I’ve gone through numerous websites and can’t find out who WON the damn race !!! Bennett…WHO WON ???

I don’t know! Will see what I can do.
BK