Several California Department of Fish and Wildlife (CDFW) fish hatchery facilities in the eastern Sierra and Southern California are battling a bacterial outbreak that has the potential to cause significant losses to both hatchery and wild fish populations. The outbreak of Lactococcus garvieae, which is similar to streptococcus, has sickened fish at the Mojave River Hatchery and has been detected at both the Black Rock and Fish Springs hatcheries. A fourth CDFW hatchery, Hot Creek Hatchery, was originally quarantined out of caution but after testing that quarantine has been lifted.

The L. garvieae bacteria has never before been detected in fish in California, and CDFW must take a cautious and careful approach to ensure the protection of the state’s aquatic resources – fish, hatchery facilities and public waterways. Infected fish can show symptoms including bulging eyes, lethargic or erratic swimming and increased mortality, or be asymptomatic and show no signs of infection depending on a several factors including water temperature and stress. Fish-to-human transmission of this bacteria is rare and unlikely. 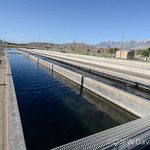 Fish stocking has temporarily been halted from the facilities under quarantine while hatchery staff treats the affected fish populations and takes measures to prevent the spread of the bacteria. Planting will resume when fish have recovered from the infections and fisheries pathologists have determined that they no longer present a threat to the environment.

“This is a challenge for our hatcheries because the bacteria is previously unknown in California, and we don’t have tried-and-true strategies on hand to combat it,” said Jay Rowan, environmental program manager for CDFW’s Hatchery Production and Fish Health Laboratory. “A successful approach will have three components: Treating the affected fish at the hatcheries, finding the origin of the outbreak, and planning ahead to contain and prevent the spread of the bacteria. Unfortunately, we may be in for a long battle here, which means there will not be a lot of fish plants in the near future in the eastern Sierra and Southern California. I wish we could give anglers a target date for when we think we can start planting again, but it’s all up to how fast and how well the fish respond to the treatments.”

Current treatment measures at the hatcheries include keeping water temperatures low, reducing stress due to crowding and other factors, introducing antibiotic medication and special diet in order to assist the fish in fighting off the infection. CDFW is currently investigating the source of the outbreak. For additional information, please see CDFW’s frequently asked questions about the L. garvieae outbreak.

I would like to know how much money it cost to change the name from dfg to dfw money that could have been used to improve the hatcheries. This bacteria is just another excuse for the incompetence of haters personnel. Bring back private hatcheries,they never had these problems

Earl Duran Your right,things have changed,but..IMO…more like only the last 4 or 5 years or so. Luckily,I live up here,so I don’t have that draw-back of having to do that long,dangerous drive from about Cal City to the Inyo and Mono Counties. For us living up here,the biggest change is… Read more »

I agree, getting there is half the fun, but over the last 10 years fishing has changed, maybe it is me, or just a sign of the times ,Today I almost got run off the road twice close to Olancha, people passing on double line heading to the High Sierra,… Read more »

Earl Duran If you put the $$$ sign in front of every hobby someone might have,it would probably eliminate all of them. I think for most of us,fishing is a hobby,which includes drives getting to where your going,time spent in the wilderness away from people (if you can nowdays ),pitching… Read more »

Fishing is a thing in my past, It is not worth the time and effort, the price to fish is way to high. For some planters. come on now.

This is very long and not current but any information on the subject is a closely guarded secret. https://www.summitpost.org/phpBB3/fish-eradication-frog-support-through-poison-t66770.html About 10 years ago the courts decided that Rainbow, Brown, and Brook trout were an invasive species. The first year fish and game cut the annual fish plant in half. The… Read more »

That license fee pays for the hatchery folks who are trying to fix the problem.

Yea…. Guess you are right… but…but… what about the Hundred Bucks wife and i gave in January???? No fishing? Give the license fee back? I don’t know anything anymore…

Dont come back. Seems like a good year for multiple reasons to leave fishing closed.