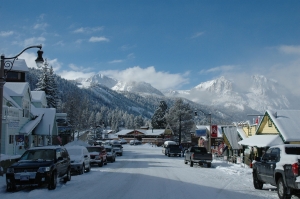 A couple of weeks ago, Mammoth Mountain CEO Rusty Gregory stated that his plans, as recorded in a report to the Forest Service, are to re-open June Mountain next year. Even so, some in June Lake continue to “aggressively look for a buyer for the Mountain.”  This, according to Mono Supervisor-Elect Tim Alpers.

The Forest Service did issue a letter of permit non-compliance to CEO Gregory after he announced closure of June Mountain.  The rules give him a year to come up with a plan and re-open the facility that sits on the Forest permit.  Tim Alpers said that barring drought or financial issues he believes Gregory is committed to re-open the Mountain.  As for the search for a new buyer, Alpers said CEO Gregory has said if the price is right, he would sell.

This year, the June Lake Revitalization Committee and others have worked hard to make their town attractive in spite of the lack of its major amenity, the ski area.  Tim Alpers said the town looks great – lots of lights and a beautiful appearance.  The community has planned a list of events to attract visitors as well as cross-country skiing.  The event list includes breakfast with Santa, music and dancing, a winter festival and triathlon, a snowmobile rally and new trails for cross-country skiing.

Alpers said he thinks the events will be successful and will continue as features when the ski area re-opens.  The County earlier granted the community $100,000 for marketing.  Alpers said, “The people understand they were granted $100,000 of their fellow citizens’ tax dollars and they’re treating it as if it is their own.”

The soon to be official County Supervisor said that another committee is coming soon, headed by Carl Williams, June Mountain’s former manager.  That group will examine how the community can help make June Mountain successful, how the mountain should be run.  Alpers said they will possibly visit some ski areas in the East which are about the size of June Mountain and are very successful.  The local people may examine those ski areas’ balance sheets and operation plans.

Alpers said one vision is to look at Mammoth and June Mountains as a regional facility not June Mountain as an overflow for Mammoth. Alpers said, “June can cater to young families and develop customers for many years.”  In short, he said, “We’re looking for a new way to do business.”

More on plans for June Lake this winter at today’s Mono County Tourism and Film Commission meeting at 10am at the Walker Community Center.

Rusty is so full of crap it’s amazes me. He says he would sell if the price is right. What happen to we’re losing millions a year and can’t afford to keep it open?

Closed?
Can’t close the Sierras!
Rusty or no Rusty, June’ll be a great hike and ski mountain this year if it snows,

Good job Tim Aipers!!! Hang in there for the folks of June Lakes and for everyone within Mono County!!! Don, an old miner from the East Side of the Sierras……