“Combine a long drought and a heat wave with the fact that wild birds and mammals raise their broods and packs of babies during spring and summer and you’ve got a full house at any wildlife rehabilitation facility,” said Eastern Sierra Wildlife Care’s director and founder, Cindy Kamler. 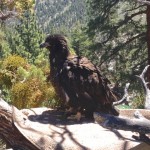 “Baby season,” as these months are known in rehab circles, is always the busiest time of year as nests are cut or blown down, mother raccoons and hummingbirds are killed by cars and hitting windows. Sometimes young ones leave the nest too soon.

Studies in drought-stricken US areas found that wildlife parents may be forced to relocate to find new areas with water and food and often are injured or killed in the process. Even sadder, parents sometimes are forced to abandon their young when they can’t find enough food for themselves and their babies.

“One of our biggest babies ever was the not-ready-to-fly Bald Eagle who fell from his nest in the June Lake area about the first of July,” Kamler said. ESWC’s immediate goal, once they knew he was not injured, was to reunite him with his family. 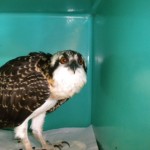 Thanks to combined efforts of locals, wildlife officials, and ESWC’s volunteers and staff, a few days later he was placed in an artificial “nest” near the original nest,  and his parents soon began to feed him. “The latest word on the family is that both young eaglets are flying and along with their parents have left the area,” reported Kamler.

One of the tiniest bird babies cared for at the Eastern Sierra’s only wildlife rehab center is the hummingbird. “Several species of hummers nest in the area,” explained Kamler.  Adult birds weigh 3-4 grams; babies weigh even less. “Some folks in the McClaren area had a tree cut down and found one little baby on the ground after the tree was removed.

“Hummingbirds have a super fast metabolism and grow quickly. Our little guy is now helicoptering around and eating from a small hanging, red-tipped syringe. In another week or so, he’ll be able to fend for himself,” explained Cindy.

Finches, robins, sparrows, ravens and crows, orioles, ducklings, raccoons, squirrels, three coyote pups and more have received care from the Center. Raptors include Great Horned and Saw-whet Owls, Red-shouldered and Red-tailed Hawks, and a Northern Harrier (a rare bird in rehabilitation). Some have already been released, others still need some growing time.

“Our newest patient is a young Osprey, possibly out of his nest too soon,” reported Kamler. “I’m busy trying to arrange reuniting him with his family. The best parents are always the baby’s own parents!”

Thank you ESWC for all the work you do for our wildlife!