By News Staff on December 28, 2011 in Government Agencies/Utilities

The Mono County Sheriff Search and Rescue Team is a non-profit organization of volunteers dedicated to saving lives.  They do searches and rescues at any time, in any weather, for as long as it takes, for free. Each year, the Team honors members for their individual excellence and public service.  Two annual awards are given by the Team each year to honor members who have excelled. 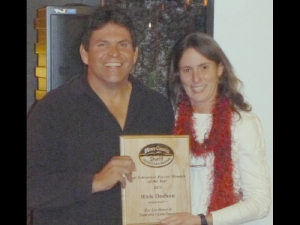 The team’s main honor for achievement is the Pete Schoerner Rescue Member of the Year award.  The award is named in memory of a beloved teammate who was killed in an ice climbing accident in 1996.

The Pete Schoerner Rescue Member of the Year for 2011 is Rick Dodson.  Rick serves the Team as Equipment Officer, Board of Directors member, and participated in 51 team events in 2011, including 14 field missions.  Since 2010, Rick has served the County on 102 team events, including 30 rescues and searches.  He has a wide variety of skills, and is one of the team’s key players in all types of missions.

New members in training are called Candidate Members, and must undergo training, practice, and testing in eighteen skill categories before being considered for advancement to Rescue Member.  Examples of these skills include first aid and victim care, tracking, technical rescue, mountain navigation, helicopter operations, and skill with electronic aids such as computers, radios, avalanche transceivers, and GPS receivers. 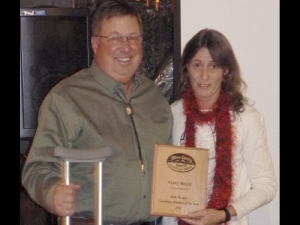 Completion of all requirements takes a lot of dedication and faithfulness over a period that is typically a year or more.

This year the team selected Gary Boyd as the Rick Mosher Candidate Member of the Year.  Gary has been very active and faithful in both his training and in rescue operations, and quickly advanced to Rescue Member status.  He has participated in 59 Team events, including 17 searches and rescues since he began his training in March of 2010.  Gary also has a busy life as the CEO of Mammoth Hospital.