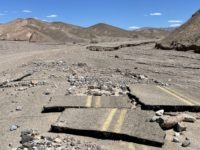 Many roads in the park remain closed four weeks after the flood. Drivers should not assume that directions from map apps are accurate for traveling through Death Valley at this time.  Information on park road status is at nps.gov/deva/planyourvisit/conditions.htm.

Travelers should not drive past “road closed” signs. This is especially dangerous during heat waves, such as the 120- to 124-degree temperatures forecasted for Labor Day weekend. There is no cell phone coverage in most of the Park to call for help in case of vehicle problems.

National Park Service and Caltrans have opened Highway 190 (CA-190), Dantes View, Badwater Road (only from CA-190 to Badwater), and Artists Drive. Hotels, restaurants, and gas stations are open in the Park.

Federal Highways Administration has issued a contract to clear debris and fill in road gaps on several major park roads that are currently closed. This work will allow the NPS to open Beatty Cutoff Road, North Highway, Badwater Road (from Badwater to Shoshone), and Mud Canyon Road. No timeline is available yet. These initial repairs will allow standard passenger cars to drive on the roads, which will have gravel sections where pavement is missing.

After initial public access is established, the contractor will pave the damaged sections and make other permanent repairs. The roads will remain open during that time with traffic control for safety.