The Adventure Trails pilot project still needs approval from the Los Angeles Department of Water and Power. But, according to Aqueduct Manager Jim Yannotta, the department has been talking to Inyo County staff and “will ultimately support” the program. 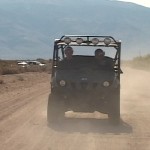 For Inyo County Public Works Director Clint Quilter, “time is of the essence.” Public Works has to provide a report on the program by the end of 2015 and needs something to report on.

“There are some issues we need to be comfortable with,” said Yannotta. Some of the seven routes, providing street access to trail heads, start at County campgrounds on LADWP leases. As the deepest pockets involved in the pilot project, LADWP has to be protected from lawsuits.  “It’s indemnity language that can be worked through,” Yannotta said.

LADWP also wants protection in the event of excessive dust and potential fines from Great Basin Unified Air Pollution Control District as well as damage to biological resources on those routes that lead to city-owned lands in the valley.

“With increased use,” Yannotta said, “there’s going to be additional wear and tear” on department-maintained roads. LADWP doesn’t want to absorb maintenance costs beyond “normal wear and tear.”

“We met with the County Wednesday,” Yannotta said. “We want language that protects the City; we will be able to get this resolved.”

I ran up to the Whoa Nelli Delli patio for a fish taco and String Theory on Sunday. Couldn’t leave town till after 4:00 so was near Smokey Bear Flat about 4:30. The OHV trails through the pines along 395 were boiling with dust. The Mono County Adventure Trails EIR… Read more »

http://sierrawave.net/27028/dust-pollution-declared-carcinogenic/ “Existing air quality laws have long considered dust particulates health hazards, but now the description has gone further declaring dust carcinogenic. Director Schade said it has long been known that Owens Lake dust worsens emphysema and athsma and is connected to heart disease, but this is the first time… Read more »

We’re getting a lot of dust up here in Mammoth. Sometimes we can’t even see the Whites. My eyes are scratchy. It seems to get worse every year.

As an Inyo County tax payer I am very troubled by all of the County resources being wasted on this effort. How many times are we told that the Inyo County budget is in the red, yet County resources continue to be used for this “pilot” project. It’s not going… Read more »

Those pushing this Adventure Trails System adamantly, even vehemently, insist it is completely safe and will harm nothing. It has been pointed out many times since the beginning of this process: It is common to have the project proponents indemnify the land owners, purchase insurance and post performance bonds to… Read more »

Wayne- all these people who cry about how we should not be allowed to do this and that in the name of public safety drive me nuts. People are all ready allowed to ride their toys on every one of these dirt roads. What harm are they going to do… Read more »

Trouble…..Maybe getting in the way of cars and trucks…I can remember the post someone putting on this site a few weeks back saying of the “family of quail”…a whole family,Mom,Dad and kids on their own ATV’s driving the opposite direction heading into traffic on the shoulder kicking up dirt and… Read more »

Low Inyo- maybe they should ban all sports and outdoor activities just in case someone might get hurt? You’re are playing on peoples fears!

Trouble…..Maybe so, if some people were pushing to have all sports and activities taking place on the shoulders and streets of Inyo County,hoping they make some $$$$ by allowing it…

Yes, all these “fears” will happen. ATV’s will raise dust and the Great Basin will levy fines. Yes, the roads will get whooped out and LAWPD will have to grade. Yes, the conservation groups will “find; biological damage and sue. Yes, green sticker money will be used to pay for… Read more »