Last Friday morning on March 6, on what proved to be a very nice day, County officials and representatives from Wolverine Interest, LLC official broke ground on the long-awaited Inyo County consolidated office building, which is estimated to take between 10-12 months to build. The building, which the county has been working on having built for more than 10 years, is just north of and adjacent to Grocery Outlet.

The goal was to “bring all of our offices in Bishop into one location,” said Inyo County Chief Administrative Officer Clint Quilter at the opening of the ceremony.
“Rather than have people go from one county office location to another in different buildings,” Quilter said, “they would be able to go to just one location for all their needs from the county.”

That said, it was emphasized several times that the new building was only for services already being provided in Bishop and it would not affect in any way the county services provided to residents of the south county and the employees working in Independence and Lone Pine.

It has long been recognized within the count that many of its employees currently work in buildings that are not in very good condition. Quilter noted that at least with a new building, the employees will be able to “provide good service to county residents, which is what they really care about when they come to work every day.”

The Inyo County Board of Supervisors approved a build-to suit lease agreement with Wolverine/Inyo LLC on Jan. 15, 2019, after ten, often frustrating, years of bringing the project to fruition. The agreement called for Wolverine/Inyo LLC to develop the property to the county’s specifications and receive lease payments from Inyo County over a 20-year period. After the 20-year lease period, title to the property will transfer over to Inyo County. 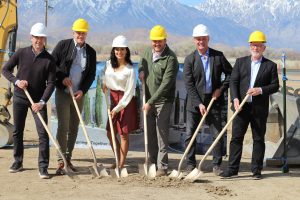 Developer Jim Leslie, Managing Principal for Wolverine Interests, based out of Dallas, Texas, told the gathering at the ceremony that the financing of the building was completed around Christmas and that they will be starting construction as soon as next week.

Inyo County Third District Supervisor Rick Pucci told the gathering that it was their “responsibility as public servants to provide the best services to the people in the most cost-effective way, noting that every dollar the county spends is public money.” He went on to thank former county supervisor, Linda Arcularius, sitting in the audience, for her work while on the board over the years towards the goal.

Second District Supervisor Jeff Griffiths sounded an optimistic note. “What excites me most,” he said, “is looking into the future.”

Griffiths thinks the county will break even in as little as eight years, and after that, “(This building) will save the taxpayers hundreds of thousands of taxpayer money that can then be used to meet other needs of county’s constituents.”

Matt Kingsley, the Fifth District Supervisor and current chairperson of the board, said, “The county is not trying to build a monument to county government, but rather an office space that’s safe and efficient, and provides better service to the public.” He also liked the idea that the county would be an “owner; not a renter” of the buildings from where its services are provided.

CAO Quilter, as well as the county supervisors, acknowledged the work of County Counsel Marshall Rudolph and credited real estate consultant Allan D. Kotin for providing the Board with options to move forward with the project. Quilter and the county supervisors also credited former County Administrator Officer Kevin Carunchio several times during the ceremony for his shepherding the project. He worked on the idea of a Consolidated Office Building with the Board and public for 8 years.

Again, look for the new County Consolidated Services Building to open within the next 10-12 months. One Stop Shopping for County Services with bargain grocery shopping right next door! Can life get any better?

I hope this works out for all of us using County services in the North.

I live in the South so maybe we get something next.