Devon Mathis, Inyo County’s representative in the State Assembly, toured Northern Inyo Healthcare District in late June. In meeting with the district’s leadership, Mathis got a first-hand look at the advances the District has made in improving access to modern technology and provider services during the last year. 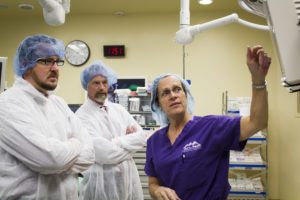 Also joining Assemblyman Mathis for the tour were Pete Watercott and John Ungersma, president and vice president, respectively, of the NIHD Board of Directors, as well as NIHD’s Chief Operating Officer Kelli Huntsinger.

Mathis and the NIHD leaders discussed the state of healthcare in rural California and the nation over lunch at Perry’s Italian Café. Dr. Flanigan stressed the importance of developing partnerships between rural healthcare providers and state officials while Huntsinger discussed challenges smaller facilities face in meeting some state mandates. 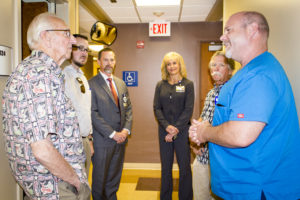 Watercott and Ungersma urged Mathis to champion legislation that would reduce the cost of expanding healthcare and help make employment in rural areas more attractive to physicians.