The late-Lone Pine resident Austin “Ray” Sisson, who was born on February 24, 1923, the son of a Kentucky coal miner. He passed away December 28, 2013 after a life-long love of art that ranged from simply enjoying looking at it to creating his own art over a span of decades. With over 200 works of art, Sisson, was once asked why he never tried to sell his work. “I paint for me,” was his reply. As if to prove it, he continued painting even though he would become legally blind from age-related macular degeneration (AMD) in the last twenty-three years of his life.

Macular degeneration is the leading cause of legal blindness among people over age 65. It depletes the central vision and impairs the ability to differentiate color and detail. The peripheral vision usually remains and can be used in some ways to compensate for the loss in central vision, which is how Sisson managed to continue painting long after being diagnosed, first with “dry AMD” in 1990, and then later, “wet AMD” in 2000. 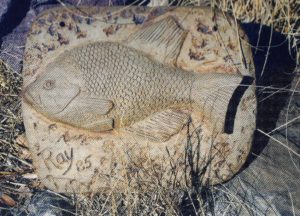 It is easy to assume that blindness or severely impaired vision would be the end of a visual artist’s career, but that is not necessarily so. There is a long history of world-famous artists such as the French Impressionists Cézanne, Monet, Degas, Pissarro, Vincent van Gogh, and American abstract artist Georgia O’Keefe, that produced some of their greatest works even as their eyesight went into steep decline in later life.

Edgar Degas, for example, suffered from retinopathy at the age 36 that gave way to a loss of central vision at age 57 from “wet” macular degeneration. How did he continue to draw and paint? He learned to adapt. His choice of subjects changed. He began working with pastels instead of oils because pastels require less precision, and he took up sculpture, printmaking, and photography. Because his eyes were extremely sensitive to bright light, he found painting and drawing indoors (dance halls, theaters, etc.) where light could be better controlled. He often had to rest his eyes for weeks at a time due to the strain on his eyes. 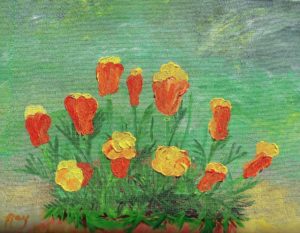 Patients with age-related “wet” macular degeneration (AMD) are only able to see dim or blurred images in the center of the eye, if not a black hole or black spots, while peripheral vision remains intact. Imagine looking at a face in front of you and only seeing the center blurred or blotted out completely, but still able to see the outer edges of your vision. This became the only way that Ray Sisson could “see” for the last 13 years of his life. But like Degas, rather than give up, he adapted.

Sisson’s close friend and neighbor for many years, Richard Cervantes, greatly valued Ray’s friendship and admired his dedication to his art. Richard and his wife, Kathy, are art collectors and the walls inside their home are covered with artworks by local artists. Richard accompanied this writer to the home of Betty Sisson for an interview and viewing of artworks by her husband. 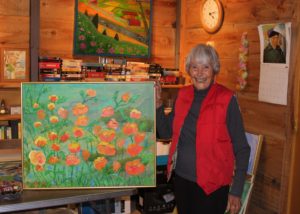 Betty Sisson shows one of her husband’s painting inside his workshop. Note the Van Gogh calendar on the wall.

Cervantes had been looking to add a work by Sisson to his collection, specifically one titled California Poppies circa 2005. At the end of the interview with Sisson’s wife Betty (they were married 37 years), she handed the painting over to a smiling Cervantes.

California Poppies is an Impressionistic work. Many visual artists, including Sisson, often turn towards Impressionism as their eyesight begins to fail. Impressionism uses an abstract point of view that renders subjects in far less detail and realism. Sisson focused on texture and colors using a painting technique known as impasto, which is a way of applying a heavy, thick paint that seems to “lift” from the canvass. Yet another advantage is that paint can also be mixed right on the canvass. 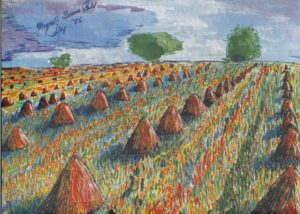 Largely self-taught, Sisson took art classes in the early 1950’s, one year at the School of Art at UCLA in the 1950s and later painting classes in Santa Monica. He jokingly wrote in his book, I Paint for Me, published in 2014, that he had yet “to be to be discovered,” but as he would unabashedly tell you, he liked his own work. He painted for his own enjoyment and the simple, yet satisfying “love of painting art.”

“I love brilliant colors and the paintings of the impressionists and fauves,” wrote Sisson. He also loved drawings and painting old cowboy boots and old shoes, saying they showed “character” from everyday use by the wearer. 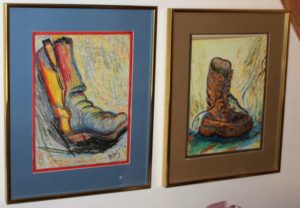 Ray Sisson loved drawing and painting old cowboy boots and shoes It is a thing.

Sisson loved painting wild flowers such as daisies, sunflowers, dandelions, Indian paint brush, and poppies. He also made the occasional self-portrait along with portraits of others that played significant roles in his life, such as his own father.

Working in a variety of mediums and styles served Sisson well as his eyesight diminished. He was enamored with the works of world-famous artists and painting styles whether it was the work of Expressionism artists, Edvard Munch, Käthe Kollwitz, and Pablo Picasso, who was also an Impressionist, Post-Impressionist, Cubist and Surrealist.

Ray loved Impressionist and Post-Impressionist Paul Cézanne, and especially the works of Henri Matisse his short-lived Fauvist (French for “Wild Beasts”) phase which used aggressive vivid expressionistic and non-naturalistic use of color painted directly from nature. 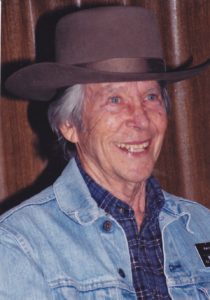 Ray Sisson – A year before he would lose his central vision. 1999

Van Gogh, Sisson noted, had a heavy influence on his painting. Miguel’s Sesame Field, circa 1986, is reminiscent of Van Gogh’s Haystack Series. Sisson worked in a variety of mediums from drawings in charcoal and pastel chalk to watercolors, acrylics, oil, pottery, and sculptured ceramic reliefs.

With over 200 works of art, along with his entertaining writing style, Ray Sisson demonstrated his life-long passion for the visual arts. His friendship and self-deprecating sense of humor are still remembered fondly by all those that knew him, and while a local exhibit featuring his artwork has yet to be held, there is talk of doing so. If it does happen, it will be an education in art as well as overcoming adversity that could have easily put an end to his life-long love of art and painting.

Ray was a warm and genuine friend who was a delight to be with and to explore present and past experiences. Being an aeronautic engineer working on designing parts and instruments for space or simply camping and loving being out in the desert, Ray was a gift to all who… Read more »