51 year old Ronald Watson of Onyx, California, the man accused of lighting a string of fires in Mammoth in June of 2007, is scheduled for trial next week. 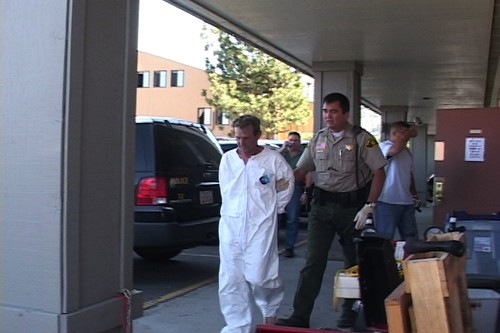 After allegedly making threats (that included telling people to prepare to die) at the Forest Service Visitor Center, police report that they followed a pattern of suspicious fires from the Visitor Center headed toward the Mammoth Trailer Park. There, police report that they saw the suspect bashing in a cabin with a shovel. Police alleged that Watson used gasoline to set fires.

Watson has been charged with five counts of alleged arson on forest land, one count of attempted arson of a tent, and misdemeanor vandalism for the cabin at the RV Park.

Watson remains in custody. After undergoing a psychological evaluation, Watson was found competent to stand trial in August. That trial date has now been set for Thursday of next week.

We work to provide daily news to all of the Eastern Sierra, in the tradition of Eastern Sierra News Service and the Sierra Wave. We bring you daily happenings, local politics, crime, government dealings and fun stuff. Please contact us.
View all posts by News Staff →
Bureaucrat Beat: Cobbler Wanted, Tree Responsibility and 2 Letters
Recount of District 5 Inyo Election