Mammoth water officials have made public the fact that drinking water supplies in town have exceeded the Federal Maximum Contaminate Level standards for arsenic. Officials quickly add that this does not amount to an emergency situation. 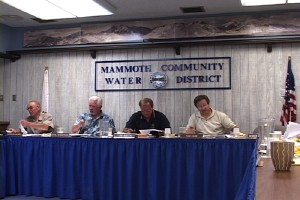 Officials say that Mammoth residents do not have to use an alternative water supply. They add that "some people who drink water containing arsenic in excess of the standards over many years may experience health effects.

The arsenic was detected arsenic I n varying concentrations in groundwater pumped from the local aquifer due to naturally occurring mineral sources. The water district uses more groundwater in the summer but some is currently in use. Lake Mary's waters contain no detectable arsenic.

Officials recently noted that two groundwater treatment plants produced water with arsenic concentrations above 10 parts per billion. The water district has hired an engineering firm to look into this and recommend measures to improve the arsenic removal process.

Again, officials underscore that arsenic occurs naturally in the groundwater at varying concentrations.

We work to provide daily news to all of the Eastern Sierra, in the tradition of Eastern Sierra News Service and the Sierra Wave. We bring you daily happenings, local politics, crime, government dealings and fun stuff. Please contact us.
View all posts by News Staff →
Mammoth News Briefs: Parking, Paying and Congratulating
More Narcotic Arrests in Mono County