By News Staff on January 27, 2014 in Government Agencies/Utilities 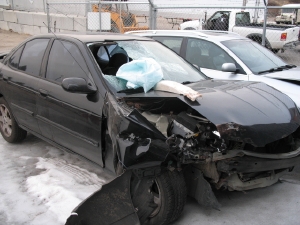 Last Thursday at around midnight, the Bishop California Highway Patrol Office received a call from the Mono Sheriff’s Department to report a solo vehicle, non-injury accident involving a driver possibly under the influence of alcohol. Officers did ultimately arrest a June Lake woman who was the driver.

The CHP said that an officer from the Bridgeport Area’s Mammoth Lakes Resident Post responded to the wreck and met with a Mono Sheriff’s Deputy at the collision location. According to the CHP, their officer investigated and determined that the driver of the vehicle had been unable to steer through a curve in the roadway which was Substation Road east of Highway 395 and Mammoth Lakes. The car left the roadway and hit a tree. The airbags were deployed.

The CHP Officer on scene determined that the vehicle’s driver, Ms. Shelby Vaughn, 21 of June Lake, was “under the influence of alcohol at the time of the collision.” The Officer arrested her. The CHP reported that Ms. Vaughn was issued DMV documents suspending her driver’s license. She was transported to Bridgeport and booked into the Mono County Jail. Ms. Vaughn’s two passengers were picked up by friends.