By News Staff on July 26, 2013 in Government Agencies/Utilities

On Sunday, July 21st at approximately 10:20 PM, Sheriff’s Dispatch was contacted regarding an armed robbery and stabbing that occurred at the Pearsonville Shell gas station. 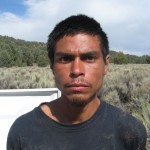 Prior to the Inyo County Sheriff’s Deputies responding on scene, the victim was transported to the Ridgecrest hospital, and then flown to Bakersfield for emergency treatment.

The victim, who was an employee of the Shell station, was severely attacked; injuries included facial lacerations, punctured lung, and broken rib. The victim was able to give a partial description of the subject on Sunday evening.

The description, coupled with the image that Sheriff’s Investigators were able to retrieve from surveillance video, were enough information for a “be-on-the-look-out” to be issued to local and allied agencies.

On Tuesday, July 23rd at approximately 4:00 PM, Tulare County Sheriff’s Office received a report of a potential carjacking and stabbing in the Kennedy Meadows area.

Inyo County Sheriff’s Office will be requesting a warrant from the Inyo County District Attorney for separate charges of armed robbery and attempted murder.

So I guess we can’t even ask if he is an illegal alien? But we should if we’re going to have immigration reform. Making a decission on immigration reform without knowing if these people are adding to our crime stats wouldn’t be wise.

oh,by the way big al,it wasnt an anglo,i guess alotta things could just have easily been,but it wasnt,and it wasnt an anglo,who pulled a gun on a jogger and crashed in crowley,but i guess it could have been

I think you still can carry a weapon in your house or place of work legally (ie if you are a clerk at a remote gas station with no cops in the area). Read California Penal Code sections 12025 and 12031 if you want to know more about what you… Read more »

I’d rather be judged by twelve then carried by six

Angling for a justifiable reason to kill someone are we? People walking around in public armed is for tribal regions of Pakistan, Afghanistan, Somalia or Yemen. Civilized and educated people don’t walk around armed, living by the law of the jungle.

Desert Tortoise….problem with your reasoning is fine for the people that obey the laws of the land…but not how it is with the others that choose not to. In Oregon,back in 1995, I was robbed at gunpoint at the job I was working at late at night,and two days later… Read more »

D. T., I’d rather have it and NOT need it, than to need it and NOT have it. Capt. Woodrow F. Call, Texas Rangers

I worked for decades in LA and San Diego, always at night and often in the worst parts of town. I couldn’t afford to live in the better parts either. I never carried a weapon and still don’t. I have been shot at, still have one of the bullets in… Read more »

D.T. You echo my thoughts but not my experience. I just stay away from people in general. I think everybody is nuts and dangerous.

I would have enjoyed shooting that guy driving the mini cooper given the oppertunity.

I highly doubt I would ever pay for a beer at any cowboy bar in the Eastern Sierra again.

DT,
True in your case but in this case the suspect would have most likely been shot and the clerk and the other carjack victim would’ve been better off.

Out of curiosity (since I live in Olancha and have heard a lot of conflicting info) – how was the police response hindered by the flood near Dunmovin since the stabbing happened around 10:20 pm (and I saw the lights from the cop cars on the highway around then) and… Read more »

Well ferdinand .. could just have easily been an anglo as well.

Even conservatives can change
Reply to  Big AL

Well, well, well.
An ultra-conservative blogger owning up to the absurdity of today’s racial stereotyping.
Truly, anybody can see the light if they open their eyes and minds to the process.
I’m proud of you, Big.

Mark
Reply to  Even conservatives can change

it’s not that absurd.

To bad someone up Kennedy Meadows way didn’t shoot him dead. I know most folks are packing weapons up that way.

My favorite bartender who is also an illegal alien from Mexico said he just hopes he’s not in this country illegally because it makes us look bad. I can understand his concern.