Four Shillings Short, the music duo of Aodh Og (pronounced Ay-Og) O’Tuama and Christy Martin, tour the Eastern Sierra this week to perform their eclectic blend of Folk, Celtic and 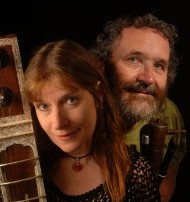 Since inception in the Bay Area in 1985, Four Shillings Short has taken an experimental approach to folk and traditional music. Martin says that between the two they play 30 different musical instruments, playing them in traditional styles as well as adapting them to transcend genres and traditions.

Four Shillings Short have created a program geared toward schools and libraries to introduce young audiences to the range of instruments and music in their repertoire. All performances are free and family friendly with one show, in Mammoth Lakes, specifically geared toward children.

Martin says they believe strongly in providing an opportunity for everyone to enjoy music, specifically, she says, “without economic barrier.”

Five performances in five days will take the duo from Bridgeport to Bishop between Tuesday, October 12th and Saturday October 13th. This Eastside tour will be the culmination of 2 _ years of touring the western United States and next year they begin a 2 _ year road trip east of the Rockies. Martin says they hope to be back in the Eastern Sierra in October 2013.

Learn more about Four Shillings Short log on to www.FourShillingsShort.com.

We work to provide daily news to all of the Eastern Sierra, in the tradition of Eastern Sierra News Service and the Sierra Wave. We bring you daily happenings, local politics, crime, government dealings and fun stuff. Please contact us.
View all posts by News Staff →
Kathryn Maffioli Found Deceased in Her Van
Mammoth Police Trace Suspect Through Cell Phone