Mutual water companies and environmental groups have been waiting a year to find out what their participation in the Owens Valley Groundwater Authority might look like. The question of Associate Members and Interested Parties was on last Thursday’s agenda, but potential members of either category may never get a seat at the table. 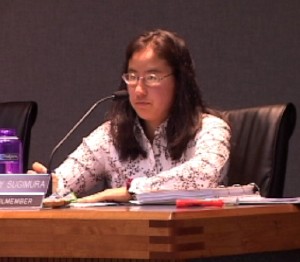 The Joint Powers Authority that set the guidelines for the formation of the Owens Valley basin’s groundwater sustainability agency spelled out participation of groups other than governmental agencies. It was complicated, but gave a voice to groups outside the immediate circle.

Each federally-recognized Tribe would get one seat each with two votes, the one caveat: participating Tribes would have to implement the plan. Federal agencies would get one seat and two votes. Los Angeles Department of Water and Power: one seat, four votes. Mutual water companies: three seats, two votes each. Interested Parties would get four seats at the table with one vote each.

Wendy Sugimura, Mono County’s Community Development Department director, had the daunting task of presenting options to the OVGA Board.

She pointed out the maximum participation spelled out in the JPA would add 13 members to the existing 11-members raising the question of the cumbersomeness of a 24-seat board.

Sugimura presented a range of alternatives that would reduce voting participation by both Associates and Interested Parties. In one alternative, advisory committees would provide input on specific issues with no voting power and the Board would stay at the current 11.

Then things got gnarly.

“It looks like you’re asking for a change to the JPA,” April Zrelack said.

Phil Anaya pointed out the promises of additional representation made at Inyo Board of Supervisors’ meeting. During the round of outreach by consultants, the Owens Valley Committee “was almost promised representation,” Mary Roper pointed out.

Later in the discussion Mono Supervisor and OVGA Chair Fred Stump accused Roper and the OVC of “myopic fixation with Fish Slough at an early outreach meeting.” Roper had no idea what he was talking about.

During the lengthy discussion, Stump said he “was obligated to protect the farmers” in Tri-Valley and that Inyo wrote the JPA with no input from Mono. Anaya responded, “Mono still signed it.”

Dave Tanksley, representing mutual water companies, had an interesting take on advisory committees. “That’s where you put squeaky wheels to keep them busy,” he said.

The Board was split. Inyo Supervisor Dan Totheroh reminded the board how, over a short period of time, the chaos of 11 members settled down. He understood fear over the potential size, but “the Interested Parties and Associates should be represented.”

There was discussion about additional members’ requirement to contribute funding. Why should they get a seat at the table when they have no skin in the game was the argument. During the Mono Supervisors’ meeting, late last year, Stump urged the County to pick up the tab for Wheeler Crest CSD and Tri-Valley Groundwater Management District. The Board approved that motion.

Three of the existing seats are occupied by entities that opted to reduce their voting power from four to two and not pay into the cost of developing a Groundwater Sustainability Plan, a cost that will largely be covered by a $713,000 grant with reimbursements back to the paying agencies. As for the cost of implementing the eventual plan, Anaya said everyone assumed that cost would be covered by an increase in property taxes.

When a tally was taken, based on voting power, the additional representation faction held a slim margin.

Bishop City Councilmember Chris Costello came up with a logical solution—get a firm idea of how many Associates and Interested Parties wanted to participate and go from there. Maybe the fear of an unwieldy board was misplaced.

Vote was taken and everyone agreed.