By News Staff on August 8, 2011 in Government Agencies/Utilities 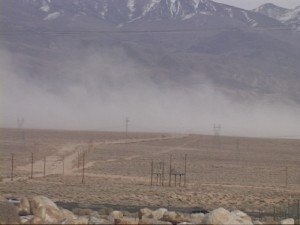 In a strongly worded, 7-page letter, Air Pollution Control District Director Ted Schade tears apart the Los Angeles Department of Water and Power’s refusal to clean up a remaining three square miles of pollution.  The refusal,  Schade says, is “not based on law or science, is not a reasonable conclusion and would subject the Owens Valley public and environment to many additional years of unhealthful dust.”

Schade exposes DWP’s denial of the dust problem as an old tactic described by Schade as “denial, delay and broken promises.”  The APCD Director carefully points out that by law and by agreement with DWP, he is bound to examine the lake bed for ongoing pollution.  He credits DWP with reduction of pollution by almost 80% of what was the “largest, single source of PM10 air pollution in the country.”

The letter to DWP General Manager Ron Nichols is the Final 2011 Supplemental Control Requirements Determination, required by by law and by agreements with DWP.  It covers data between 2006 and 2010.  Schade describes the determination as a “reasonable requirement to control 2.93 square miles of additional areas” on the dry lake bed that caused or contributed to 112 violations of the federal 24-hour PM10 air quality standard.

Schade says DWP’s claims that the 3 acres are not a problem lack “any credible supporting evidence.” He says APCD does offer strong proof that DWP’s claims are false – claims that the dust really comes from somewhere besides the dry lake bed or from construction-related activities.  Schade also reveals that DWP refused to cooperate with earlier talks that related to this new dust issue.

Schade’s letter says, “Instead of controlling the undisputed air pollution and protecting public health and the environment, the DWP proposes to postpone all additional PM10 controls and, instead, conduct more studies.”  Schade’s letter says with regret that “this is not the time for a return to the pre-1998 days of denial, delay and broken promises.”

Observers of Owens Valley water issues commented that DWP has used the same tired tactic of delay and study to stymie groundwater recovery.  According to the APCD board order, Schade has directed DWP to come up with a remedial action plan in 60 days to use pollution control measures on the some 3 square miles of lake bed and to prepare plans for 2 more square miles that are on “Watch” for pollution.

Sierra Wave placed a call to LADWP headquarters in Los Angeles to request a comment from General Manager Ron Nichols.  We await his reply.

The amount of water loss through evaporation in the open canals and aqueduct around the Owens valley isn’t significant; however, I’ve talked to subcontractors of LADWP’s and they have emphatically stated that the entire flow of the aqueduct and all of its tributaries could be released into the Dry Lake… Read more »

David – Owens Lake is a saline terminal lake. For thousands of years water and minerals flowed in, but only the water evaporated, leaving behind a saltier and saltier lake (like Mono Lake). Millions of tons of salt have been deposited on the lake bed. Any fresh water added to… Read more »

What is the composition of the salt deposits? Are there any valuable minerals there? Could the lake bed be scraped to remove the salts? Just wondering if there is some kind of scheme whereby the salts could be removed so that the lake could be filled and used as a… Read more »

When we use the word salt at Owens Lake, we are typically not referring to table salt (sodium chloride). Owens Lake salts are mostly sodium sulfate and sodium carbonate salts, like trona. US Borax has a lease for the salt. It just isn’t worth enough and is located too far… Read more »

Thanks for your informative reply. I was grasping at straws.

The real solution would be for L.A. to use less water — like that would ever happen.

And now,this fall and winter,another group of workers coming in, contracted out to help” solve” the problem…….Simple solution said it all….Just put some(a bunch) of water back in the lake……simple solution…

How about just put some water back in the dry lake?

Because Simple, Los Angeles continues to live by William Mulholland’s famous statement, “There it is. Take it.” Mulholland was also quoted as saying (in regards to the taking of the water) that he, “half-regretted the demise of so many of the valley’s orchard trees, because now there were no longer… Read more »

Delay and study? With so many staff members at LADWP making in excess of $85K a year this should be no problem for them to study. Multi-million dollar contracts are constantly being let out to companies in Idaho and elsewhere to tweak results that show LADWP is not causing groundwater… Read more »

I never heard of Ted Schade before today, but I already like ya! Screw DWP!