After DWP has delayed dust controls on the Owens Dry Lake and now wants to use a temporary fix, Air Pollution Control 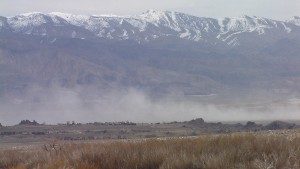 Schade’s job is to enforce the 2006 settlement agreement with DWP over Dry Lake clean-up. LADWP has asked the APCD for delays and temporary fixes to avoid the more expensive but permanent methods. A year ago, DWP said they would be late on a 3.1 square mile section of the lake where they had hoped to do what is called Moat and Row – basically tall rows of dirt that were supposed to keep dust down. The State Lands Commission, which owns the lake bed, said no.

Schade did manage to get DWP to agree to an expedited clean-up of two square miles near the north and west edge of the lake bed. DWP will apply gravel there to keep dust down. Still up in the air, the 3.1 square miles. Schade said DWP says they want to do a temporary fix with what’s called tilling. “Clods of dirt,” said Schade, “that they hope will be wind resistant.” APCD has not yet approved the plan.

“We need a permanent solution,” said Schade firmly. “If not, we can start to fine DWP $10,000 a day. We’re at the point,” he said, “where fines seem to be the only way to get them moving. We’ve tried to be reasonable but ultimately we have to carry out the agreement. They continue to fall short.”

Director Schade said DWP is using more water on the dry lake right now than they have to. He said if they were more careful with their water use, they could use the water saved to shallow flood the required areas.” Schade said it appears that higher ups have not provided enough money to get the job done. “The Owens Lake can not be fixed fast, cheap and easy. Temporary tilling is not the answer.”

We work to provide daily news to all of the Eastern Sierra, in the tradition of Eastern Sierra News Service and the Sierra Wave. We bring you daily happenings, local politics, crime, government dealings and fun stuff. Please contact us.
View all posts by News Staff →
LADWP Back with More Power Generation Plans for Inyo
Mono Sheriff Officers Send Jawbone to DOJ