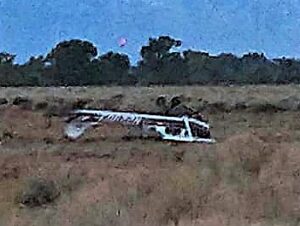 It is a well-known saying among aviators that, “Any landing you can walk away from is a good one”. (It was first penned by Gerald R. Massie in 1944 after the crash-landing of his B-17 while serving as a photographer.) In which case, the small airplane crash reported on Sunday, October 11, south of the Bishop Airport runway, was a example of a “good landing.”

The pilot reported that the engine quit as he approached the airport. He could not make it to the runway, so he had no choice but to land on the flat ground south of the runway.. The plane ended up on the ground, flipped upside-down.

According to subsequent reports, we were able to confirm that the pilot, identified as Jeff Thompson of Bishop, walked away from the crash, relatively unscathed. He then walked to his car parked at the airport, drove home, and called to report the accident as required by FAA regulations.

The cause of the accident is still under investigation according to National Transportation Safety Board. NTSB investigations can take as long as a year. Usually “all’s well that ends well,” but depending on the investigation’s preliminary findings, the pilot’s license can be revoked or suspended.

Flying is not like driving a car. Pilots are responsible for properly maintaining their planes so they don’t fall out of the sky, its not like you can pull over if your engine quits. This incident is another black eye to general aviation, it is not humorous, and it is… Read more »

Roughly 75% of general aviation crashes are attributed to pilot error. I don’t see anything wrong with noting the incident is being investigated and the potential penalties involved.

That aside, I’m glad to hear the pilot was able to walk away from this.

I agree, well done. Engine failure during landing and take off, a pilots nightmare. Most pilots would’ve have fixated on the runway, stalled the aircraft and most likely died. Leave it to the media to find the negative.
You’re reporting skills should be revoked or suspended. Shame on you.

This would be Mr. Thompson’s 3rd crashed plane in 10 years now, seems he should hang it up before it hangs him up. 🙂

Why write about the remote possibility that his licence might be revoked? This man truly did a great job in saving himself without incurring injuries to others. You have no idea of the stress involved in that emergency situation.
Well done Jeff Thompson