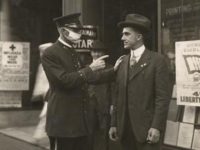 A policeman wearing a flu mask speaks to a maskless man during the Spanish flu pandemic in San Francisco in 1918. (California State Library)

Town councils and county boards of supervisors in the Eastern Sierra have all been visited, via Zoom, by an avid-anti-masker who insists all those entities are flying in the face of the Constitution by enacting laws, guidelines or public health orders requiring masks be worn in public places. He comes up just short of implying all the elected officials and staffers should come to no good end for their anti-Constitution actions.

He’s wrong. The Constitution delegates that authority to the states and the Supreme Court has upheld and elaborated on those public health orders.

According to the American Bar Association. The 10th Amendment (the one that gives states all the rights not contained in the Constitution) and Supreme Court decisions give state governments the authority to control the spread of dangerous diseases within their jurisdictions.

In the early 1800s Chief Justice John Marshall cited the 10th Amendment in the Court’s decision in Gibbons v Ogden, noting police powers, including imposing isolation and quarantine conditions, are reserved to states for activities within their boundaries.

According to the ABA, that authority is double-barreled, not only allowing states to enforce public health ordinances, but the federal government as well. 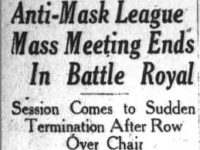 “Through the Commerce Clause (Article 1, Section 8, Clause 3) the federal government has broad authority to quarantine and impose other health measures to prevent the spread of disease from foreign countries, as well as between states.”

Public health requirements aren’t anything new. In 1902, the Supreme Court upheld a Louisiana decision that the “state could enact and enforce quarantine laws unless Congress opted to preempt them.”

During the flu pandemic in 1918-19, following public health requirements was considered patriotic, a way to protect the troops engaged in World War I. The Red Cross even came out with a public service announcement branding those who did not wear a mask as “slackers.”

Policemen in Seattle, Washington, wearing masks made by the Red Cross, during the influenza pandemic, December 1918. Credit: National Archives

Public health regulation compliance during the Spanish Flu was taken very seriously. While Inyo County Sheriff Jeff Hollowell has stated he won’t enforce Inyo’s regulations due to lack of funding and staffing, a San Francisco officer took the mask mandate very seriously. He shot a man who refused to wear a mask as well as two bystanders.

Following the World War I armistice, that zeal waned. Dissenters in San Francisco formed the Anti-Mask League. That sense of mask outrage wasn’t widespread, however.

According to the University of Washington Institute for Health Metrics and Evaluation (IHME) mask use is only 75% nationally. Tyranny of the mask? How about tyranny of the red traffic light?

In issuing a stay-at-home order for California residents on March 19, Gov. Gavin Newsom cited Government Code sections 8567, 8627 and 8665 as giving him the authority to do so. In particular, section 8627 says that during a state of emergency, the governor has complete authority over all state agencies,… Read more »

Uhh just an FYI to Deb Murphy and the Sierra Wave staff. The US Constitution and the California Constitution are documents that were designed to protect peoples Inalienable rights, our god given rights from tyrannical government. People have every right to not wear a mask if they choose not to.… Read more »

“Mask compliance is nearly 100% and the case numbers continue to rise.” You’re a funny guy, and delusional.

In other news, nobody has been forced to wear a mask.

Great article! I just hope that someday folks can go back to getting their medical information from their doctors instead of politicians. By the way, even the politicians who were publicly calling the virus a hoax have been getting the vaccine. Ignore science at your peril. Our hospitals are getting… Read more »

..And the thing is,no other Country in the world is refusing or debating wearing masks….only America. It’s ALL political now… IMO,this pandemic has brought out the worst in people. The bickering and arguing,no longer a Country that comes together during a crisis. More so,all about “me,me,me and my “rights”. For… Read more »

Actually that is inaccurate (The statement about face masks protest). A number of articles have been written on other countries that have similar protests over masks. It is not exclusive to the U.S.:
Covid-19: A look at anti-mask rallies held around the world amid the pandemic.

Charles James
Well,at least the rest of my above comment,besides the first sentence, is 100 % accurate…

Thanks. Well researched and well written. As a very wise person once said, those who fail to learn from history are doomed to repeat it. Unfortunately they doom others along with them. Amazing how many folks apparently slept through both science and civics…

Thank you for this article! The 10th Amendment is something a lot of folks have overlooked apparently. Too bad some folks don’t care enough about other people to do one little thing to keep children in schools, businesses open and their neighbors alive.

I doubt any of these facts will sway the laymen experts amongst us.

The Inyo county Sheriff is not alone in enforcement. Los Angeles, Orange County, San Diego County, Riverside County follow the same thoughts as to enforcement. Are they all wrong?

Here is a great news video about it from KTLA
https://www.youtube.com/watch?v=y5U6MaAPyqA&feature=emb_logo

Yes, they are wrong. Their sworn duty is to protect the public safety. Instead they endanger it by encouraging others to flout the laws and regulations designed to protect us all. Where mask mandates have been put in place, the rate of Covid-19 transmission slows down, and fewer people are… Read more »

The difference is the state legislature passed those laws. They have not passed any laws in ten months making a mask required in public. Maybe they know it wouldn’t pass. Nice try!

Please cite the enforceable law that I will be arrested for if I don’t wear a mask?

JaneE actually the Sheriff and police swear an oath to uphold the Constitution. That is their sworn duty. Good point though about protecting public safety. Do they enforce laws against assault? Myself and others have been assaulted multiple times and threatened with violence for not wearing a mask. Some people… Read more »

Yes, they are all wrong. Their choice to ignore mandates is political.

Mandates are NOT law. Mandates are political and law enforcement needs to give King Newsom the middle finger.

Apparently Susana is a constitutional scholar despite the fact that the SCOTUS has ruled in favor of mandates time and time again.

Thank you Russoloco for making my point, they are MANDATES. They are not laws! There is a big difference. If you think they are a law, please cite the appropriate code and section. I will wait your reply.

A law and a mandate have the same power to be enforced. The only difference is how it came to be. A law is passed by the senate and the house of representatives and signed by the governor. A mandate is made by the governor, with the power given to… Read more »

Governor mandates executed under the CESA, (California Emergency Services Act) only apply to government. They do not apply to the people.