Harry Williams looks at the Owens River with different eyes. 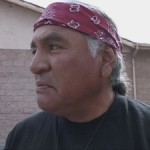 Nobody ever told his people that “man has dominion over all the earth.” The relationship between Native Americans and the world they live in is familial. “If we don’t take care of Mother Earth,” he said in a telephone interview yesterday, “she won’t take care of you.”

As a board member on the Owens Valley Committee, Williams had just gotten out of a meeting with the Lower Owens River Project Memorandum of Understanding partners. The meeting was called to test the waters on changing the base flows and the pump-back station capacity.

The 40 cubic feet per second base flow and 50 cfs limit at the station were codified in the MOU requiring unanimous agreement from all five partners. At last month’s LORP Annual Report, the project consultants, Ecosystem Sciences, repeated their recommendations that both aspects of the agreement be changed for a three-year period to improve water quality, encourage tree growth and control the invasive tule growth.

At that January meeting, other MOU partners seemed open to changes in the restrictions. The OVC board has yet to vote. “They’re going to play the blame game,” said Williams. “That doesn’t bother me. I’ll vote for what I think is right.”

The consultants’ perspective is that the restrictions are negatively impacting the goals of the project; something different should be put in place to get the river back on track. Williams has a different perspective. “It’s a 62-mile long river,” he said. “It’s not just the area below the Alabama Gates (where most of the issues are apparent). It’s a mitigation project (for Los Angeles Department of Water and Power groundwater pumping). We shouldn’t complain about the tules. There are bugs, frogs, other wildlife there.”

According to Williams, the project was to be monitored for its first 15 years; the river was re-watered seven years ago, half way through that time period. He wants to give the Owens a chance to repair itself. “Nature doesn’t go that fast,” he said. “Woody recruitment doesn’t just happen. The river banks haven’t stabilized yet.”

Much of the progress has been stymied by three years’ of drought with little or no seasonal habitat flows initiated to help flush out the muck on the river bottom and scour the banks of tules.

The biggest sticking point is the increased capacity at the pump-back station. The consultants’ justification is fairly simple. Excess water beyond the 50 cfs capacity goes onto the Owens Delta at a time when it doesn’t need the water. “They call it a waste,” Williams said. “It’s not a waste, it’s creating habitat.”

For LADWP, the increased pumping capacity and a base flow that mirrors natural flows will allow the project to be water neutral. The same amount of water that has gone into the river at the intake below Tinemaha in the past will course down the Owens if the changes are made.

For Williams, the issue is a matter of trust. “They (LADWP) will get their foot in the door,” he said of increasing the pump capacity. Williams, like most of the OVC members, have traveled the long path of the LADWP’s second aqueduct and groundwater pumping all leading to the battles over the Long Term Water Agreement. For more recent or less invested Owens Valley residents who may view the issues from a spectators’ point of view, this is personal. “This isn’t as simple as it looks,” Williams said. “We’re not obstructing (the LORP’s progress); we’re trying to protect it.”

Williams wants to look at the language, the wording submitted to the courts to remove the restrictions for the next three years, before he can vote.

Nothing like a 4 year drought to restrict the amount of water being exported to Los Angeles from the Owens Valley. There are no words, no action, no stipulation or order from any Court that could have limit LADWP getting less than 20% of the mean average flows of water… Read more »

LADWP is currently out of compliance with the LTWA. Until they are compliant with current agreement with Inyo County there shouldn’t be any changes. It would require at least another 100cfs on average for the LORP to “mimick” nature. People are right to be mistrustful of this proposal for deck… Read more »

I don’t think anyone is doing DWP a favor by allowing increased pumping capacity so they will change the flow regime in the LORP. They put the agreed upon amount of water down the river now. There is no obligation on them to put more water down the river. Allowing… Read more »

Randy, it is not a river. It is a mitigation project that is also a meek simulation of a river. Anyone who walks the LORP can see that clearly. The point of the project, as with all the mitigation measures in the LTWA, is the value of every actual drop… Read more »

Ben, as a charter city LADWP is not accountable to any county on LA owned land. Read Article 11 of our state constitution. LAs laws supercede those of any other state or local entity in California. That is what it means to be a charter city. Only a court can… Read more »

That is not true. There are State and County Health and Safety, Criminal, and some Civil laws that the County can (and indeed some such as water borne or insect borne pathogen borne prevention must) enforce.

Where do we go from here? First, how about having our plan A and plan B strategy with regard to relationship with LADWP something other than polite society and afternoon coffee at the country club? That’s not how Inyo’s Board, DA, County Council, Water Commission and environmental activists won the… Read more »

I want to point out that the current water department staff have recently had considerable success enforcing the LTWA and holding the City accountable. They need real support from many elected offcials in order to fully enforce the agreement.

Seems to me that allowing the river to more closely mimic nature is a good in and of itself. The LORP is a chance to exercise dominion over nature in a more sensitive way. Trust between all the parties in the valley would be nice, but is not necessary to… Read more »

Thanks for this great interview with Harry Williams. And thank you, Philip, for your thoughtful comment. I was struck by one point in your conclusion, Philip, that “there will be changes and trust will one day blossom because we are all human being(s)…” Problem is, LADWP is *not* a human… Read more »

It was a long time coming the restablishment of flows in the lower Owens River . For the first seven years of these restablished flows the River has not benefited from flows that mimick other streams in the Sierras. A hydrograph of the flows in the Kern River for instance… Read more »