By News Staff on March 23, 2013 in Government Agencies/Utilities 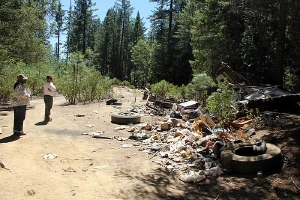 One local man, following our stories on Bureau of Land Management policing of old bottle collection, called Sierra Wave Media to say a bigger problem is current trash left out on public lands.

Roger Rilling of Mammoth Lakes pointed to the informal shooting range behind the Geothermal Plant. He called it a real problem because people use old television sets and other items as targets. Rilling said after people shoot up the TVs, they leave them there along with other trash. He said, “A couple of falls ago, the Forest Service hauled out 6,000 pounds of trash.” He said the Four Wheel Drive Club has also done clean-up.

Rilling mountain bikes and hikes and says he sees lot of trash dumped on public lands. Marty Hornick of the Forest Service does encourage people to use the area behind the Geothermal Plant for target practice because it’s “more contained.” Hornick agreed that dumping of old appliances and other trash on public land is an ongoing problem. He said Forest patrols pick up items and if they identify where they came from, track people down. Hornick said, “There are people who don’t want to pay to go to the dump.”

At the Bureau of Land Management, Law Enforcement Officer Melodie Stehwien (Stwain) said people are “always dumping things on public land.” She said people point to the limit on days that dumps are open and the fact that fees have gone up. Fines for dumping on BLM land vary, based on what is dumped.

Stehwien said, “People should take their trash where it belongs. Public lands are for all of the public to enjoy, not to abuse.”

Wouldn’t be too hard or too expensive to install one/two of those motion sensor cameras to get the offender’s license plate, especially at that site. You could probably pay for the cost after one or two citations.

and how long do you think it would last before someone swiped it. My friend was doing a Pine Marten study for USFS w/ motion triggered cameras. They ended the study when the cameras/counters kept getting stolen. Here’s an idea….. How about the people that use the range clean it… Read more »

If you wait for USFS to do something, it will take for ever…..example: the Yost Trail head parking lot access road in June Lake was washed out 3 seasons ago. To this day nothing has been done to repair it cept for a dangerouslog bridge over the creek. If you… Read more »

One more, the hundreds of decaying plastic sandbags that are making their way down Mammoth Creek, put in place 2 years ago to keep the Hayden Cabin dry. Glad they kept the old girl dry but why did they just leave that huge pile of trash along the creek to… Read more »

I dont get it. Rather than wait for the waivers and BLM and the forest service to act, why cant some people on town cleanup day just go over to the range and clean the damn thin up. Then bring to debris to one of the dumpsters in town…is that… Read more »

The last time I took a load of crud to the dump off of Benton Crossing road it cost me less than 5 bucks. A bargain in my opinion. Plus, the view of the mountains from the dump is truly amazing! It’s not too difficult or too expensive to do… Read more »

Maybe BLM can set up a sting operation, and have a CHP spouse keep an eye on the situation.

its hard to pick up a shot up t.v…lots of glass and sharp adges from the shotgun blasts,plus it might scratch the bed of my truck Like or Love

Thats why you dont allow any glass .

As much as MotherEarth can’t keep up with this cyclical consumption that the corportion’s survive on, we as a collective society don’t do much to give back for all we receive and hence continue to leave in our wake desolate waste lands and growing landfills.

You folks do not know how good you have it. Here is the pricing for Los Angeles suburban shooting and the dump. SCHOLL CANYON LANDFILL, Los Angeles (near Pasadena) Municipal Solid and Inert Waste $49.18 pick up truck load. Angelus Shooting Range, Los Angeles (supervised) Regular Fees Adults – $13.00… Read more »

I shoot up by Castaic Lake all the time.

Tim, It is my understanding that it took the Forest Service at least 2 months to get a waiver of fees when they last cleaned up the shooting range. I wouldn’t load my truck before I went to the dump.

I’m not government, I just asked and the folks at the dump said it was OK.

Kern County charges residents for use of their land fills in their property taxes instead of at the gate, so you effectively cheated some Kern County taxpayers. Nice, and you brag about it.

You don’t evey have to leave the city limits in Mammoth. Just walk around and you;ll see plenty of trash.

As in any resort community, you will find some visitors pitching trash out the windows or leaving trash for the locals to clean up. Every Spring however, the locals in Mammoth come together, like any respectful community should, and have an annual trash pick up day. It’s has become a… Read more »

The BLM ought to post two signs there. One that says “No Dumping” and another that says “No Shooting”, then prosecute the living heck out of violators.

Its a legal shooting spot-been that way for decades…how about people just dont litter. We don’t need more signs in the forest, A lil self policing would do more than the 2[!] BLM cops in the area..

Yep, I figured I would get some thumbs down. Everyone wants to do what they want and never take an ounce of responsibility for the outcome. Blame the guvment, but never look at the face in the mirror. Nope, can’t have that. It’s always the other guy.

I always take a photo of EVERY sign I come across out in the wild that says NO SHOOTING…99.9% of them are un-readable because of over-ventilation (wink, wink).

My dad used to say “where else but America could a guy go drive around shooting signs and drinking beer”. Now they would charge ya with at least 3 felonies. Yes I do miss the good days.

Trouble…Yeah,but maybe not so funny to be drinking and shooting off a gun…I’ve come up to idiots out in the desert while I’ve been walking with bullets whizzing around ,one time yelled out a person was there,and a couple guys came up to say they were sorry….and they were clearly… Read more »

wayne- your probably right, but we laughed it off back then.

Me and my buddies like to go to the range in Bishop every Sunday and practice for when the Feds come and try to collect our guns.
Bring ’em on!

You sure do produce grade A Ignorance sometimes Trouble.
Where else in the world can you have all the resources in the world to waste without the thought of generations after you not getting the same chance to waste the resources that we all take for granted!

With all due respect, Jeremiah,
I think trashing a person’s post by saying they are ignorant is no different than calling them names.
Way too much of that sort of garbage going on today in the name of political discourse.

Well Civility Police, I myself am sick of all the Neutrality we see and we don’t see enough Objectivity in the areas where generations after us are counting on us to fight for there best interest! So excuse me If my “nobody is sacred attitude” treads on or hurts your… Read more »

Whoa there, Jeremiah. No feelings have been hurt in noticing a certain style of communicating electronically that is in vogue today. And I am quite sure that was not your intent. And also quite sure you might be mistaken that I am “foaming at the mouth.” However, you must admit,… Read more »

“…generations after us are counting on us to fight for there (sic) best interest! ” Well, that sounds admirable enough, but the fact is, each generation begets a more liberal and open-minded philosophy than the one before it. Case in point, Voters under 30 overwhelmingly voted for Obama and support… Read more »

we have an unwritten rule at our gun range in June Lake…..no glass,pottery,tvs ect..pack it in pack it out..Plus we do a clean up every month or so.

If the trash is over 50 yrs old it is protected by one law. If its over 100 yrs its protected by another law. If you want to throw out your TV or Fridge or other trash – shoot it first. Just like that – your trash becomes a target.… Read more »

Dingo….I don’t have all my teeth….in fact,very few left….and on a daily basis,I PICK UP trash that others have left on the highways and in the desert…Oh,but I do have dentures.

Dingo, it’s been my experience that (usually), the apple doesn’t fall far from the tree.

Yep, and when it does hit the ground, it becomes closer to it’s roots.

When I see garbage dumped on public lands I cant help to wonder where these people come from and if they still have all their teeth. I wonder what kind of parents they have and what they would think. People can be so stupid, my only question is HOW does… Read more »

@Trouble
Or maybe they should quit having so many kids.

You sure your name not spelled Disco? I quite that 40 years ago.

Good one salblaster. But I do think the county/blm should consider the high dump fees they charge the public, for basic household goods, as the real reason they see a increase in dumping.

Thanks Wayne. I appreciate good advise. I know I got a bleeding hart for the poor , but have yet to find a bad reason for that.

In my opinion if you can’t afford the dump fee you should always dump your trash on the steps of city hall.

Let me fix this for you: If you can’t afford the dump fee you should always produce less trash and consume fewer resources.

That wasn’t so hard.

shot up t.v.s and dishwashers wont fit on my curios shelf

Maybe some people have to choose between paying the high dump fees or feeding their kids.

Trouble…If that is the case,they should go dump their trash in one of those big dumpsters around apartments,or in campgrounds….and if confronted,explain their situation to whoever caught them.I’m sure they would understand,or if it’s Law Enforcement,I doubt they would end up in jail.Public land ain’t a dumping ground for anyone,no… Read more »

People really don’t like to have others use their trash receptacles. It costs money to have trash pick up service. It’s not looked on with understanding up here.