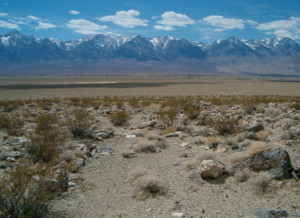 Northland would construct its solar project east of Independence.

Within a few miles of the location that the Los Angeles Department of Water and Power has chosen for a major solar project, another company has plans for an equally large solar array. The Inyo Planning Department is waiting for a go-ahead.

Planning Director Josh Hart said that the Northland Power project is in a holding pattern and planners are waiting for the company to tell them to go ahead with an Environmental Impact Report. The Planning Department did issue a Notice of Preparation for an EIR. That notice says that the project site includes 1,280 acres five miles east of Independence and would operate a photovoltaic power plant generating about 200 megawatts of power.

The notice also says that construction is anticipated to begin in 2014 with operations to start later that year. The Initial Study conducted by the Planning Department shows the potential for significant adverse impacts that would require mitigation.

Asked if this project, not far from DWP’s proposed site south and east of Independence, would create a cumulative impact concern, Planning Director Hart said his staff would have to look at that and analyze it. He said it is a “relevant issue.”

Earlier documents say the project could involve up to 175 construction workers at the peak of construction. Water would be provided by existing on-site wells. Northland Power would interconnect with DWP’s transmission grid. The project also includes an operations and maintenance building with parking for ten or fifteen vehicles.

58 Responses to Another mega-solar project near Independence