More than 150 burros, seven mules and nine horses were removed from the Wild Burro Rescue and Preservation Project in Olancha. Project operator Diane Chontas has been arrested.

Inyo County Sheriff’s Department conducted the seizure. The rescue took two days to move the animals to a safe location where they were given veterinary care.

According to Mark Meyers of Peaceful Valley Donkey Rescue in San Angelo, Texas, conditions at the Olancha operation were “indescribable.” Six of the animals had to be euthanized. “This did not need to happen,” he said in a phone interview.

Photos on Meyers’ website show one of the rescued burros with crippling, over-grown hooves. In the wild, rough terrain keeps equine hooves somewhat under control. In captivity with no farrier care, the hooves grow out, often curling up. 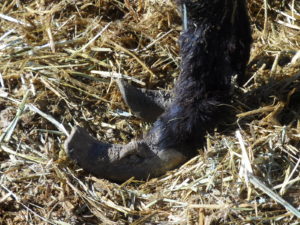 Meyers pulled together five haulers with a 15-25 animal capacity from Arizona, Texas and Virginia to move the animals to what he described in a press release as a “secure holding facility.” The burros will be microchipped and tested for common equine diseases.

Peaceful Valley is a 172-acre ranch; Meyers’ operation includes sanctuaries for older burros and donkeys as well as adoption centers across the country. 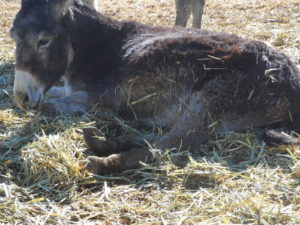 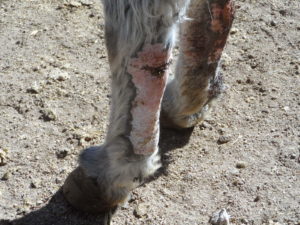 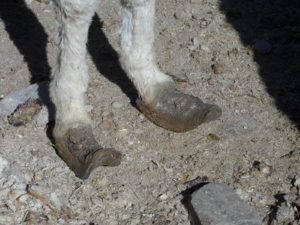 Admittedly I haven’t seen Diana in 20 years, since she and her then-husband Gene operated WBR from Onalaska, WA…but she is the absolute LAST person I would have expected this of. She was 110% dedicated to those burros. It’s no exaggeration to say that she chose them over her marriage.… Read more »

I am so heart sick seeing this. I volunteered for this organization while it was still based in Washington, before she divorced Gene. They were both so dedicated to the care of these precious animals. They dedicated every hour of every day to their care. I don’t know what happened… Read more »

Thank you for treading lightly, I think. Ms. Chontas is only 62. She is far from old, senile, How silly. I know Diana well. I have visited her preserve many times over the years. I have seen improvements yearly. Diana is not neglectful nor an abuser. None of you know… Read more »

It would be nice if people would let the investigation be completed before making harsh judgments and condemning those about whom most of us know very little, if at all. Let’s not fall into the trap of judging others by appearance, actions or behavior, while we judge ourselves by our… Read more »

In December of 2017, this non-profit reported receiving $577,515 in tax free revenue on their Federal Form 990. I wonder how much of that went to the care of the animals.

This is plan sad, I’m glad the animals are now in better care. But I’m pretty sure that this is the last thing the founders intended to happen when they started. My guess the lady arrested needs as much help as these poor animals. Not jail.

These were not her pets. She was running a trusted Rescue. Throw the book at her.