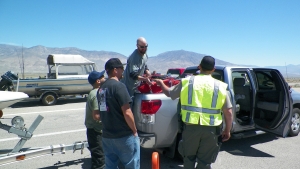 The California Department of Fish and Wildlife held an angler and hunter checkpoint again this year, taking place Monday south of Bishop at the truck scales.

CDFW officers stopped vehicles southbound on US Highway 395 and asked if they’d been fishing or hunting. Those that had were asked to show their catches to officers.