By News Staff on March 17, 2014 in Government Agencies/Utilities 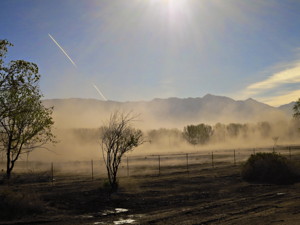 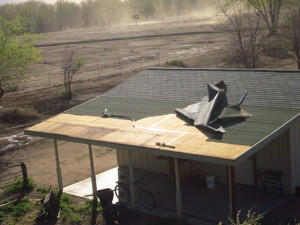 Department of Water and Power crews clear-cut acres to the east of Independence between a residential area and the tree lot.  It is supposed to be what is called the “Independence Re-greening Project” as an enhancement/ mitigation measure required in the signing of the Long Term Water Agreement.  Residents were upset that the desert plants and animals established in that area were uprooted.  One homeowner in particular woke up to roof damage, he said, because DWP removed a wind break of vegetation to the north.
Said Andrew Kirk, “It has been about one month since the DWP crews cleared out the windbreak to the north of my house. I built my garage back in 2003. It has endured plenty of wind events since then with no damage. But this morning – without the windbreak – my carport lost about one-half of its roof.”
The wind also created a large dust event since nothing so far has greened up to hold the dust own.

We work to provide daily news to all of the Eastern Sierra, in the tradition of Eastern Sierra News Service and the Sierra Wave. We bring you daily happenings, local politics, crime, government dealings and fun stuff. Please contact us.
View all posts by News Staff →
The latest on embezzlement and medical record cases
CHP makes DUI arrest
4 Comments
Newest
Oldest Most Voted
Inline Feedbacks
View all comments

Ok ,
I still do not understand why you would clear cut trees to re green?

Must be a motive here! And it stinks all the way up here.

They get paid vway too much!

There not even done people and it looks very nice where they clean up in the north side I just walk by today. dwp been cleaning up the independence creek very well.good job dwp about time you get out of your trucks

So please tell us what we are missing?
How is this a mitigation and re-greening.
Someone fooled someone.

It is time that the people take measures into their own hands.