By News Staff on September 19, 2012 in Government Agencies/Utilities 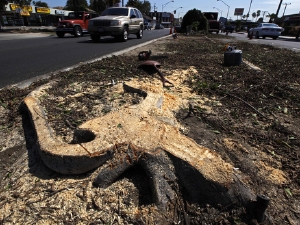 What is it with Los Angeles officialdom and its calloused disregard for trees?  Hey, LA, they’re living things!  What don’t you get???  We in the Bureaucrat Beat Newsroom and countless southland citizens felt ill at the sight of city workers cutting down 400 trees, 50 years and older to make way for the Space Shuttle Endeavour to go to the American Science Center.  It’s so LA, don’tcha think?

We talked to a local Eastern Sierra citizen who was there when some of those LA trees were planted 50 years ago.  He feels sick at the destruction of what took so long to become beautiful and strong.  The streets of Inglewood and South LA will look, well, naked and dead.  This so the Space Shuttle can come through town.  Some media outlets reported the move will cost $10 million.  Now, we’re really sick.

The Mayor of Inglewood, dollar signs dancing in his head from what he thinks will be astonishing tourism drawn by the shuttle, rationalized that there will be two new trees planted for every destroyed one.  Not good enough.  Come on people, try harder to honor the living.  Tell us how much you have to pay to equal the incredible experience of looking at long rows of big, healthy, shady trees.  Beauty is not for sale. Even the LA Times wrote an editorial in support of the tree slaughter.  Shame on you, LA.

As DWP blithely takes as much water as it can get, there is no thought or remembrance of the thousands of trees that died in the wake of LA’s aqueduct drain. And, by the way, LADWP now admits the City Charter says get all the water you can get.  Yeah.  We knew that.  At least the City of Los Angeles will not bring the space shuttle to the Owens Valley with destruction on what trees we have left along the highway.

And now, DWP doesn’t want to give water to the McNally ponds in the devastated Laws area.  In the 80s, and we saw it happen, mega pumps sucked out water from Laws and the rest of us watched everything die.  Under the water agreement, DWP is supposed to give water to the McNally ponds as mitigation for their environmental slaps.  This year, they don’t want to.  Good luck, Inyo County.

Hey, maybe this is LA’s problem – too much. Bill Moyers in Nation of Change talks poverty.  He quotes social psychologist Paul Piff who told National Public Radio, “The more wealth you have, the more focused on your own self and your own needs you become, and the less attuned to the needs of other people you also become.”   Now I get why all the guys in Washington, D.C. (and LA) can’t relate to the rest of us.  Hey, maybe this is Mitt Romney’s problem – has too much to care about anyone else.

LA Times writer Michael Hiltzik goes to the Romney gaff which was secretly recorded in which he accuses 47% of the populus of mooching off government and demanding healthcare and food.  Hiltzik analyzes the 47% and finds that the “vast majority are people who are working or who have worked in the past.  Their ranks,” writes Hiltzik, “include millions of Americans who are now retired, living on Social Security and Medicare benefits they paid for throughout their working lives.”  He says many others recently fell low in the economic crisis, lost jobs and homes.  He also points out that many of this 47% pay big bucks in payroll taxes.  Enough said.

Back on the closer home front, did Fish and Game secretly kill a bear and her cubs in the Mammoth Lakes Basin?  That’s the scuttlebutt.  And from the sublime and sad animal world to the internet ridiculous.  Have you heard about the latest whoopdeedo?  The Walker Art Center in Minneapolis is presenting the first Internet Cat Video Film Festival.  Meowww!  Had I known, Bureaucrat Beat Newsroom cat, Tuxedo, would have been entered.  He’s handsome and charming.  Well, at least we think so. About 70 cat videos went 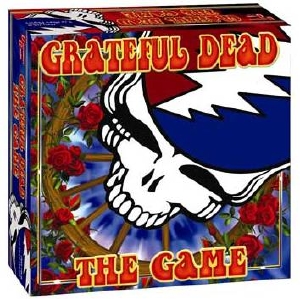 on display at the Walker.  Keep cameras at the ready.

Hey, bureaucrats, the public may have cameras ready, so watch it.  One of our readers reported that recently at a re-paving job on Barlow Lane in Bishop he saw not one, but two people at the intersection making sure no cars turned north.  The citizen saw dollar signs.  “They both just stood there talking, smoking and doing nothing observable,” he said, “between loaded hotmix trucks.”  One worker, he noted, would have done.

Maybe extra workers can take this board game to work to kill time.  We found it hard to believe, but, yes, there is a Grateful Dead board game.  The publisher says it travels through time with Jerry and the gang answering trivia questions and collecting concert tickets, ala monopoly money.  You get to play with dancing skeleton game pieces.  Ooooookay.

And finally a bit of redundancy.  Seems Governor Martin O’Malley signed a measure to allow a casino in Prince George’s County, just miles from Washington, D.C.  It was signed, big surprise, in a late night session.  It will go to a public vote.  But, hey, the D.C. guys already have the biggest casino in the area – the Capitol Building!!

Ahh the trees are a fitting metaphor for the shuttle program itself. $1B for every launch. The Hubble was put in low Earth orbit so that the shuttle would have a reason to exist (maintenance, blah blah blah—even though the cost of one shuttle launch could buy two new Hubbles).… Read more »

It is spelled “populace” my dear. Reporter-editors really should avail themselves of spell checkers if they seek to persuade by the credibility of their prose.

Sweetie Pie Tourbillon, In the late night haze of the Bureaucrat Beat Newsroom, sometimes one forgets. The computer never knew since populous is a word.
Benett Kessler

With the “47%” statement,it only proves….once again…..what a fool Mitt Romney really is…….and why he won’t beat President Obama in November….

Romney’s 47% comment didn’t change the way I feel about him cause I am aware this is how rich people talk among themselves. I can’t stand how the politicians think we are all dummies to think we will buy there trickle down ideas like taxing the rich will hurt job… Read more »

maybe theyll turn the shuttle into lowincome housing,then the shuttle will get a nice new paint job,and shiney new bars on the windows,oh yeh dont forget the bullit hole ventilation

Honor the living? Beauty is not for sale? All that is honored is the almighty dollar it seems
and everything is for sale if the price is right, or high enough.
Money and power, it brings out the evil in people, in Obama as much as Romney.

Are they really going to put the Space Shuttle in Inglewood? I wouldn’t park my car in that city.

A lot of work that went into the shuttle and other aircraft was done in Inglewood. I agree about the trees, what were they thinking?

Great post, Benett. Thanks! And I agree: Tuxedo is the very model of handsome and charming.

Inyo/Mono Counties need to go on a major, national, PR campaign to show the Country (and especially L.A. voters and citizens) how destructive the LADWP is to the Owens Valley, past, present & future. Some of you may not like Michael Moore’s work, but he might be the perfect person… Read more »

To me this is okay. The trees were grown on Owens Valley water in a town that was a desert. I would rather see rocks and sage planted to replace them. And 400 trees planted back in Owens valley.

Oh yeah … and $10 million? And this state is broke .. oh but wait, I think that is a private entity, they have money to burn .. something wrong here! In better times .. this wouldn’t even be thought of as absurd.

I’m not a tree hugger by far .. but I thought this was senseless, but what was really disturbing, was the fact that all of the officials at the California history center and the the officials in city hall in Inglewood were like .. oh well .. this is what… Read more »

One of your readers was probably Stan Smith at the Barlow job.

Wrong. It was not Stan Smith.
BK