Interview conducted by Deb Schweizer, who wrote, “Recently, I was asked by our Civil Rights Officer if I was aware of someone local who would make a good profile for Women’s History Month and I thought of Connie Millar. For years, I have considered Connie as the woman who researches pikas and climate who was an East Side local who did a lot of her work on the Inyo. It gave me a great opportunity to interview someone who has been an influence on me from afar for many years. It was also a great honor. The interview was conducted on March 7, 2019.”

CM: I wanted to open by saying that it was wonderful to have this call from the Inyo. In the beginning of my USFS career, I informally adopted a national forest (the Inyo). I thought it was important to see issues in the field. That field work formed a lot of what I did. 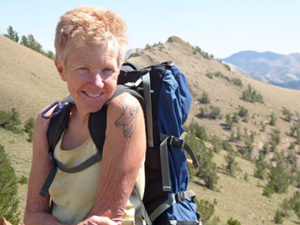 Describe your job to me a little: title, how long have you been doing it, what it is:

CM: I am a Research Scientist for the Pacific Southwest Research Station. I am also a Senior Scientist, which is an honorary title based upon my research and accomplishments. I am one of 15 Senior Scientists in the USFS and the only woman.

I received my Bachelors of Science in Forest Science from University of Washington and my Masters and PhD from UC Berkeley Department of Genetics (1985).

I began my career as research scientist with the Pacific Southwest Research Station in Berkeley in 1987, although I had worked as a seasonal wilderness ranger on the Willamette when I was in college.

What is your research focused on?

CM: My research focusses on mountain ecosystems of the Great Basin, high elevations conifers, the alpine environment, and how climate interacts with these ecosystems.

How has it informed the agency’s work or contributed to the scientific community?

CM: I was interested in being a boundary spanner by developing science-based management with staff on the Inyo and other national forests. It has evolved over the years with agency initiatives:

1)      In the 80s, the agency transitioned from a focus on extractive policies to a focus on biodiversity. It was a struggle for the agency to shift to managing all species. As a biologist, I tried to help the Inyo with this transition.

2)      As the work of science was translated to bring understanding to the public, increased interest led to ecosystem management in the agency in the 90s. Scientists played a closer role in the decisions made by land managers, and I worked close to NFS staff to translate ecosystem management concepts into practice

3)      Climate change adaptation. This issue emerged into the public and agency conscious in the early 2000s. My work tried to address the question: what does this look like to a land manager with a lens on Best Management Practices based on science?

What’s been a particular highlight or something you are particularly proud of in your USFS career?

CM: I am proud of the way I helped to build bridges between management and science. In 1992, I worked and lived at the compound when the Lee Vining Ranger Station was a vibrant and busy office.  I would give seminars that brought my colleagues to the District office, go to the field with forest staff, and would hear from them what they needed from scientists (if anything!). This was important work for me and hopefully useful to Inyo staff.

With the Sierra Nevada Ecosystem Project, my research helped champion for environmental systems on a recreation forest. I worked with land managers to promote protection of the amazing Inyo landscapes.

What’s been a challenge and how did you/do you deal with it?

CM: I am quite introverted and I had to learn to step out to be a leader and address large crowds. It is not by nature comfortable for me.

Any advice to new USFS employees or scientists?

CM: In my 32 years with the USFS, my credo has always been to find your passions. Try to get the job that fits your passions. Know that you can’t always do only that in your job, but do the bread and butter, or what is needed for your job, and then let your passions guide you. Go to your supervisor with innovative and creative ideas. I’ve been able to make my job something that pushed my passionate curiosity, and this has not only been personally satisfying but hopefully benefited my science and resource managers.

Anything else you want to add?

CM: I really want all of us, scientists, field staff, district rangers, to stay in the field. No less than one day a week should be spent in the field. The more we lose touch with the issues that emerge on the ground, the more time we spend behind desks, it is clear what happens:  our science suffers and our management suffers. 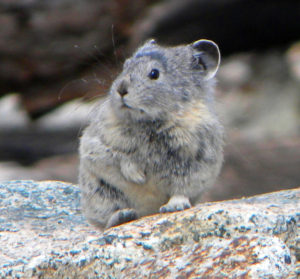 As a light hearted question, I asked Connie why pikas are so cute.  She answered with a scientific angle: Neoteny, the retention of juvenile features in the adult animal. These same features in babies and kittens and puppies lead to a nurturing or protective instinct (and why we find them cute as well). Pikas retain these types of features as adults.

She also shared a quote from a peer, Chris Daly, which she offers as good guidance for anyone in the agency. Daly is a professor at Oregon State University and the founder of the PRISM climate model.

“Don’t let people convince you that your set of mental strengths are unimportant, and that your ways of thinking should be dismissed, just because they are different from the norm.  It’s who you are, so how can you dismiss yourself?  Figure out how your special skills can help solve problems you really care about.  If there isn’t a name for how you do things, then name it yourself.  Be persistent, work hard, and don’t get discouraged.”