SACRAMENTO – Caltrans and the California Department of Fish and Wildlife (CDFW) remind motorists to remain alert for wildlife on roadways during Watch Out for Wildlife Week, which runs September 18-24. 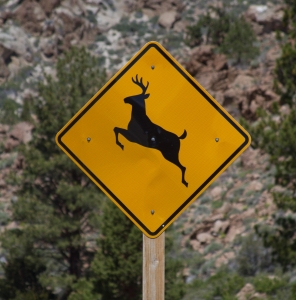 “We urge motorists to remain alert and be cautious when traveling through wildlife areas, so our roadways will remain as safe as possible,” said Caltrans Director Malcolm Dougherty. “Drivers can really make a difference in avoiding wildlife collisions, simply by being aware while driving and watching for wildlife crossing signs.”

According to Defenders of Wildlife, a national nonprofit organization dedicated to protecting native species and their natural communities, there are 725,000 to 1.5 million wildlife-vehicle collisions in the U.S. every year, resulting in more than 200 human fatalities. In California, between eight and 10 drivers and as many as 20,000 deer die in wildlife-vehicle collisions each year.

“Between now and December, deer and other wildlife are highly susceptible to vehicle collisions,” said Marc Kenyon, CDFW’s Human-Wildlife Conflict Program Manager. “Deer will soon start their annual migrations to winter range, bucks will be preoccupied competing for mates, and bears will be searching for food in preparation for hibernation. Such natural behaviors can lead these animals into the way of unsuspecting drivers. Drivers can prevent collisions with animals by being careful and paying attention.”

The Watch Out for Wildlife campaign is supported by Caltrans, CDFW, Defenders of Wildlife and the Road Ecology Center at the University of California, Davis.

Wildlife experts from these organizations offer the following tips for motorists:

Be especially alert when driving in areas frequented by wildlife, and reduce your speed so you can react safely.
Pay particular attention when driving during the morning and evening, as wildlife are most active during these times.
If you see an animal cross the road, know that another may be following.
Don’t litter. The odors may entice animals to venture near roadways.
Here are a few examples of what Caltrans, CDFW and their partners are doing to reduce wildlife-vehicle collisions, improve awareness of key issues, and improve ecological sustainability:

Highway 246, Santa Barbara County
Six new highway undercrossings have been designed for California tiger salamanders and small animals to pass safely between breeding ponds and upland habitat on the opposite sides of Highway 246 between Buellton and Lompoc. This species is protected under both state and federal Endangered Species Acts. In addition to the design and implementation of these six undercrossings, Caltrans has proposed a five-year monitoring study to assess the undercrossings’ effects on California tiger salamanders and other animals crossing the highway. The project is expected to be completed in April 2017.

Highway 89, Sierra County
On a stretch of Highway 89 between Truckee and Sierraville, a recently-completed $2.08 million project consists of two new 12-foot by 10-foot wildlife undercrossings, providing a safe path for animals to cross under the roadway. The project also includes four escape ramps and over 14,000 linear feet of deer fencing on both sides of the highway to help prevent wildlife-vehicle collisions.

Highway 76, San Diego County
Two new wildlife projects, which are part of the $208 million State Route 76 (SR-76 Corridor Project) East Segment and Interchange construction project between Interstate 15 and Interstate 5, will include six wildlife crossings and escape ramps. Wildlife escape ramps allow animals to jump out of the fenced-in highway, if needed. Post-project monitoring will be conducted after completion to monitor their use and influence decision-making for future projects. The project is expected to be completed in late 2017. Five other new wildlife crossings and directional fencing were installed as part of the SR-76 Melrose to Mission Highway Improvement Project in 2012, also part of the SR-76 Corridor Project.
# # #

California Department of Fish and Wildlife, caltrans, Watch Out for Wildlife Week