By News Staff on September 4, 2014 in Government Agencies/Utilities 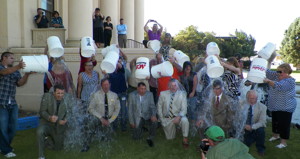 Last week, Fifth District Supervisor Matt Kingsley issued a challenge to his fellow supervisors at the end of the meeting to join him in the very successful, viral ALS Ice Bucket Challenge before this week’s regular board meeting. All of them accepted without hesitation.

The Ice Bucket Challenge involves dumping a bucket of ice water on someone’s head to promote awareness of ALS and encourage donations to research. This year the challenge went viral on social media in July and August 2014. Many celebrities and just average, regular people have now participated in the challenge.

Kingsley, choked with emotions, spoke to those gathered on the lawn in front of the Independence Courthouse as he recounted his experience with his oldest brother, Phillip, who is 71 years old and was recently diagnosed with the debilitating illness. “Phillip,” says Kingsley, “has always been active. He has been farming for the last 9 years after retiring as a professor of Psychology at Bluffton College in Ohio. It is hard to watch and to know what is ahead for him.”

“I understand that there are many causes and situations that need attention,” said Kingsley, “but for me, the opportunity to highlight the ALS cause and the fact that my brother is suffering from ALS led me to challenge the Board of Supervisors. My motivation is really about my brother Phil.”

Amyotrophic lateral sclerosis (ALS) is often referred to as “Lou Gehrig’s Disease.” It is a progressive neurodegenerative disease that affects nerve cells in the brain and the spinal cord. The progressive degeneration of the motor neurons in ALS eventually leads to death as the motor neurons die and the ability of the brain to initiate and control muscle movement is lost. Voluntary muscle action is progressively affected and patients in the later stages of the disease may become totally paralyzed.

Kinglsey reported that as of noon Thursday, there has been $3,330 raised as a result of the Ice Bucket Challenge.

Save water drink beer! Relive self on DWP porch!

Here’s some real information about ALS and the ALS Association: http://www.bostonglobe.com/lifestyle/health-wellness/2014/08/31/will-million-raised-from-ice-bucket-challenge-yield-cure-for-als/2KBDb2gfG2PfEKbDjtS5OO/story.html Barbara Newhouse, president and CEO of the ALS Association, said the nonprofit group is “absolutely committed to transparency” and will “invest these dollars wisely in areas that will have maximum impact on the fight against this devastating disease.” The… Read more »

Great information KW and thanks for the link

It looks like this was, as the DWP is fond of saying “water neutral” Here is a quote from the Inyo County Sheriff’s Department Facebook page: “Mitigating water waste is an essential component in planning the #IceBucketChallenge in Inyo County. The Historic Courthouse lawn will have the automatic sprinklers turned… Read more »

Tom O, If you look at the picture you can see everyone on the front lawn of the court house. I really doubt there was not more than 1-2 gallons of water in each bucket,which would weigh 16.68 lbs.So I’m doing the math. If the buckets were full each would… Read more »

Ok 24 gallons.Thanks Dr Slugger. Now lets multiply 24 gallons times all of the millions and millions of fools around the state/country that have dumped water on their heads.Lets just say it was 2 million people[even though it is much more than that]. 2x 2,000,000= that is 4,000,000 millions gallons… Read more »

Tom, I wish I could find a survivor of ALS who could explain to you the importance of this fund raising effort to support research for a treatment or cure, but I couldn’t find one. Unfortunately, there are none. ALS patients will die usually in 2-5 years. There is no… Read more »

We are in a severe drought. I see 60 gallons of water wasted in this picture. Multiply this by the millions of foosl around the country and that is a lot of wasted water….remember, these are the same people that are telling you to stop watering your lawn, and washing… Read more »

True that!
In Gaza they have the rubble bucket challenge, since they have a abundance of rubble and no water to waste or ability to freeze it..

Take a breath . The H2O went into the lawn maybe the aquifer. This also might be considered appropriate water banking especially intended to serve a dual purpose to educate us about ALS. Thanks Matt for the challenge and the answer of you and fellow Board Members . Hope your… Read more »

How about a “Balance the Budget” Challenge for Inyo County officials!