Slideshow, Discussion and Reception – you’re invited to join us in celebrating the publication of this special book.

Sixteen-year-old Allen Steck made his initial climb, a first ascent of Mount Maclure in the Sierra, with no hardware, no ropes, no experience. But the event turned his into a mountaineer’s life. 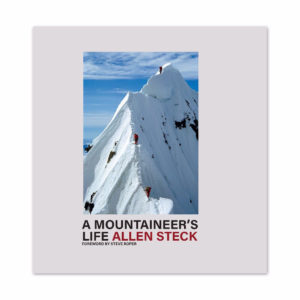 Over 70 years later Steck has had a prolific climbing career, including a 1954 expedition to Makalu, a 1963 first ascent of the south face of the Clyde Minaret, and a 1965 first ascent of the Hummingbird Ridge on Mount Logan. In 1967, with Steve Roper, he co-founded and edited Ascent magazine. Two years later, his interest in the far reaches of the world led him to partner in Mountain Travel, America’s first true adventure travel company.

These are stories from the days when mountain climbing was discovery, when men like Steck forged new routes, both literal and literary. With dry humor and detailed recall, he captures the excitement and intrigue of a time when there were few rules and no guidelines. As he says, “We do not deceive ourselves that we are engaging in an activity that is anything but debilitating, dangerous, euphoric, kinesthetic, expensive, frivolously essential, economically useless and totally without redeeming social significance. One should not probe for deeper meanings.”

With amazing photographs, many published for the first time, this memoir is a treasure, an inspiration, and an anchor to the foundation of the life-changing sport of alpine climbing.

“At ninety-one-years young, Allen Steck tells of —and reflects on—a life that has spanned almost all of climbing history. These are stories for the beginner and the veteran alike, tales to be marveled at, re-read, and re-told. Ultimately they beg a simple, profound question: When you are 91, what stories will you have to tell? – Steve House, Climber, Author, Beyond the Mountain and Training for the New Alpinism

Allen Steck, born in 1926, is an American mountaineer and alpine climber. He has climbed around the world, sending a number of first ascents, including the Steck-Salathe Route up Sentinal Rock in Yosemite Valley, and Hummingbird Ridge in Canada. Jointly with Norman Clyde, he was the first recipient of the Sierra Club’s Francis P. Farquhar Mountaineering Award in 1970. Also in 1970, he won the American Alpine Club’s Literary Award for co-authoring Fifty Classic Climbs of North America with Steve Roper.