Aleta Friend London was born to Elmer and Florence Friend on the first day of spring in 1945 and passed on November 7th due to sudden onset respiratory failure. 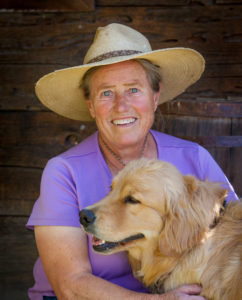 She leaves behind her family in Ojai Including son Robert Kittredge (Charlotte), sister
Anne Thacher (Tony), nephew George Thacher (Marcia), niece Emily Ayala (Tony). She
was an outstanding great-aunt to Matthew, Andrew, Mariana, Oliver and Celeste. In
Bishop she leaves stepson Craig London (Carmen) and her friends from the Rock
Creek Pack Station. She fiercely loved her family and friends, always remarking how
lucky we are to have one another.

Aleta’s early years were spent in Ojai where her father was a prominent citrus rancher.
Growing up Aleta worked for the family ranch, running the irrigation, packing tangerines
and wanting to have a horse instead of a tractor.

She had fond memories of being schooled by Monica Ros through the 5th grade where she learned her love for reading and writing and made lifelong friends. Aleta attended San Antonio School and graduated from Happy Valley (now Besant Hill) School in 1963 and then attended U.C. Davis.

Aleta married Bob Kittredge in 1965 and moved to Florida where her son Robert was
born. When her marriage to Bob ended, Aleta returned to Davis to finish her degree in English and subsequently returned to Ojai to work for the family business and raise her son.

In the late 70’s, while vacationing in the Eastern Sierras she met the love of her life,
Herbert London, who owned and ran Rock Creek Pack Station. Herb and Aleta were
married in 1984 and for many years split their time between Ojai and Bishop, hauling
furred and feathered friends between their two homes.

Known as ‘Allie’ to those in Bishop, she and Herb enjoyed many adventures: pack trips, day rides, an extensive trip to Australia and picnics in the Eastern High Sierra and beyond.

Aleta would always state “I don’t work for Rock Creek”, yet for decades Aleta was always there for Herb and Rock Creek Pack Station. She was a great hand; taking day rides, helping with spot trips, driving guests and organizing the food service. Aleta touched many lives at the pack station and all are richer for having known her.

Aleta had many horses and mules during her life and was especially proud of her mule Joe who was trained to be a world champion green cow working mule. Aleta loved animals and would characterize people by how they treated both wild and domestic creatures around them. Some of Aleta’s happiest times were with her horses, riding in the mountains or desert or simply taking her dogs on walks.

After Herb passed in 2011, Aleta moved full time to Bishop. When not helping the pack station, she enjoyed volunteer work helping kids to learn to read, working on projects with the Hospital Auxiliary, assisting Master Gardeners’ activities and helping with Mule Days activities for youth.

Aleta was authentic, a hard worker, kind and selfless. Her great smile, a zest for life and a desire to help others characterized her life. Wherever Aleta was, she provided
leadership and made things work. She was the star in the background making sure the organizations she worked with succeeded, never seeking the limelight for all she did.

Everywhere she lived, Aleta’s door was open; if you stopped in she would offer a
beverage, the conversation would flow and a meal would be prepared. She could really cook.

Aleta made amazing meals from findings from her garden, a nice cut of meat and parcels from her freezer or fridge. Nothing was wasted; she would keep the water from boiling potatoes to make soup stock, scraps for the chickens and dogs and everything was recycled.

She always kept chickens and couldn’t understand why any sensible person would not have a coop.

Sitting down at her kitchen table for a chat over a cup of coffee, cocktail(s) or a meal was a treat. If you had never had a glass of freshly squeezed OJ from Ojai she would make sure you did. What she had was to be shared, from food to books to conversation or a fierce game of Scrabble.

Aleta would not want anyone to bemoan her sudden passing. Her wishes would surely be for folks to get outside and enjoy a beautiful place, a picnic somewhere pretty or a quiet moment with a pet. In lieu of flowers she would prefer that you plant something, scatter some wildflower seeds or work in your garden.

Donations on her behalf can be made to one of the organizations that she cherished: Monica Ros School, The Ojai Valley Museum, the Bishop Hospital Auxiliary or 4pawsmammoth.com

A gathering to remember Aleta is planned for December 8th, noon, at Friend’s Stable
and Orchard, 3468 Grand Ave, Ojai. For further information call 805-646-6528.

A Trail Ride and Memorial Picnic will be on April 6, 2019 at the Millpond in Bishop at
noon.