A group of Owens Valley residents may be heading to Washington, D.C. within the next 10 days to witness the, at one time, unbelievable: the Presidential signature on legislation that includes the official designation of Alabama Hills as a National Scenic Area. 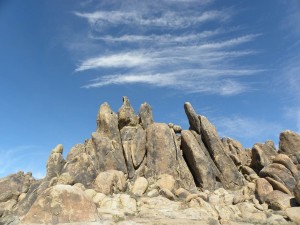 That bi-partisan effort, the Natural Resources Management Act, passed the Senate with an overwhelming 92-8 majority on February 12, the first day after the shut-down ended, according to Kevin Mazzu with the Alabama Hills Stewardship Group. House Natural Resource Committee Chair, Raul Grijalva introduced the bill Tuesday with an expedited process that limited discussion to 50 minutes and required a 2/3s vote. The final vote was 363-62.

Now the President has 10 days to sign the Act and the Stewardship’s 10-year effort to secure protection for the Hills will be over, but, according to Mazzu, now the work can really begin.

The designation allows for all existing uses with the exception of commercial mining. The benefits for the 18,000 acres of Bureau of Land Management land west of Lone Pine

will be worth the 10 years it took to get the designation in place. Federal funding will pay for two full-time people in the field as well as infrastructure improvements. The stewardship group will transition to a non-profit organization similar to the Friends of the Inyo and will have the capacity to apply for additional grant funding. Mazzu talked about a research library in an area rich with geological wonders.

“This is an exciting process,” Mazzu said. “We’ll be able to address over-use and protect the viewscape for the 120,000 visitors a year.”

The process started in 2008 and, though long, could serve as a textbook case of how to bring divergent groups together. For the first two years, the Stewardship Group sought the input of 30 stakeholders and 40 user groups, from OHV enthusiasts to hikers. “In the end, the consensus was to protect the area and people’s access,” Mazzu said.

The process also led to the transfer of historic tribal lands from BLM back to the Lone Pine Paiute Tribe, with the help of the local Los Angeles Department of Water and Power. In turn, Mazzu said, the Tribe put the majority of that land into the designation boundaries. 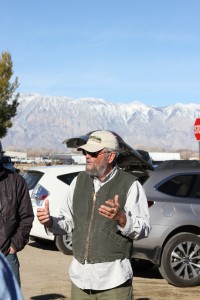 Following the community outreach, it was apparent a National Scenic Area designation would be the best vehicle. “Mike Prather drafted the legislation in 2010,” Mazzu said. “He did a masterful job. Ninety percent of Mike’s work is in the current legislation.”

The Group and Inyo Supervisors took the legislation to Senator Dianne Feinstein’s office where it was enthusiastically received by staff, but sat dormant for four years. Congressman Paul Cook picked it up and introduced it in the house. The designation legislation passed the House as a stand-alone bill but never made it to the Senate in 2016. The same thing happened in 2018 when the California Conservation and Recreation Act passed in the House was never introduced in the Senate.

Ten pages of the Alabama Hills legislation made it into the 600-page public lands bill and now only the President’s signature is needed to make it a reality.

The next step, said Mazzu, is to develop a management plan with the BLM over the next three years, a process that will bring the stakeholder groups back together again.

Ten years of bi-partisan efforts, local initiation, persistence and input has achieved the Scenic Area designation. Thanks to those who have made it happen, a great achievement. Lets hope Mr. Trump will soon sign the Legislation.

Well,some should be VERY happy today…because of some health problems and life changes soon to come,this will be my last post EVER on the Sierra Wave….late new year’s resolution…..keep my writings and opinions to myself and off the internet……how bout’ that ?……give it a like !

Best of luck with your health problems, David Dennison, seriously. All the money in the world doesn’t mean a thing if you don’t have your health.

Best wishes, DD. Your comments are sometimes weird, sometimes interesting, always unique. Enjoy everything you can as long as you can. Thanks for your input.

First and foremost, I wish the best with your health issues.

Secondly, although I find your posts a bit over the top sometimes, I always appreciate people speaking their minds.

I hear you, Jay, but as it is stated ”The designation allows for all existing uses with the exception of commercial mining.”
Unless you plan on mining the 18,000 acres it doesn’t matter much. We still get to hike, bike, moto and explore this area.

David Dennison aka Low Inyo, did you even read the article? What is your complaint anyway? When I read the headline on the SW’s homepage and noticed one comment, I thought to myself, I bet I know who that is. Sure enough, you. You sure are easy to predict, so… Read more »

I am a GDI, and I was just waiting for the comments on Trump and Republicans….it is just so old… I happy this has happened and everything does not need to be so right or wrong, black and white. Like I said, it gets old.

Not unbelievable at all,since trump rarely even walks outside,except when it’s a photo-op on a golf course with celebrities around or boarding an airplane,certainly not out not in any wilderness or forest land,if he signs this,he won’t look past the other side to this,where it will open up other areas… Read more »