Lone Pine, CA (March 12, 2019) – The Alabama Hills Stewardship Group, along with dozens of area stakeholders and the community of Lone Pine are celebrating the passage of a congressional measure that will create the first ever “Alabama Hills National Scenic Area”! 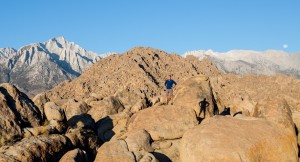 “All these years of community input has helped improve and strengthen both our stewardship efforts and this important legislation; as well as our coalition of support” stated Kevin Mazzu, board member of the Alabama Hills Stewardship Group (AHSG). “The heavy lifting was done early in the process; with several final enhancements – based on stakeholder feedback – helping the legislation reach the perfect balance between conservation and access”.

The Inyo County Board of Supervisors have also been enthusiastic in their support behind the bill, voting unanimously to endorse the legislation and traveling repeatedly to Washington DC to lobby for its passage. “We are excited to see the cooperation and hard work of local stakeholders finally coming to fruition.” Matt Kingsley, 5th District – Inyo County Supervisor said.

The legislation states: “The purpose of the National Scenic Area is to conserve, protect, and enhance for the benefit, use, and enjoyment of present and futures generations the nationally significant scenic, cultural, geological, educational, biological, historical, recreational, cinematographic, and scientific resources”…With current recreational activities in the Alabama Hills allowed to continue: “including hiking, mountain biking, rock climbing, sightseeing, horseback riding, hunting, fishing, and appropriate authorized motorized vehicle use”.

Friends of the Inyo, a local public lands advocacy group, has been a critical partner in this legislative journey, beginning with AHSG founding board member and current secretary for the FOI, Mike Prather. Mike wrote the initial legislation before handing it off to federal legislators, with most of his initial draft making it into the final legislation.

“Friends of the Inyo worked closely with our local community [Alabama Hills Stewardship Group] to bring protection to the geologic wonder of the Alabama Hills”, said Mike Prather with Friends of the Inyo, “We saw that the future required more effective management in order to head off a slow decline in the area’s beauty.”

The Alabama Hills are the birthplace of the American Western film genre and the Act will also allow the continuation of commercial filming and still photography, as well as grazing on two BLM allotments; and recreational prospecting/rock hounding in the historic mining area. These were all “must haves” expressed by key stakeholders in the designation study process.

In addition, as a part of this Act there will be a corresponding land transfer between the Inyo National Forest, BLM and the local Lone Pine Paiute – Shoshone Reservation of 132 acres of culturally sensitive land, a portion of which will be within the NSA.: “After years of discussions with all interested parties, we are confident that a National Scenic Area is the best way to protect the Alabama Hills. Our Tribe is very excited about the landmark land transfer included in the legislation.” said Kathy Bancroft, AHSG President and Tribal Historic Preservation Officer for the Lone Pine Paiute – Shoshone Reservation. “This is the first time since 1939 that the Tribe has acquired any land, and we will finally take ownership of our own cemetery.”

Mike Johnston, President of the Eastern Sierra 4WD Club who have participated in several restoration projects in the Alabama Hills, adds: “It is important that the public has access to the many beautiful areas that Mother Nature provides us, such as the Alabama Hills. And it is just as important, that the public knows how to protect the land, as they enjoy it. This new designation should help provide a means to move in that direction, and we look forward to the implementation of this National Scenic Area.”

Finally, the development of a comprehensive plan for the long-term management of the National Scenic Area shall be in consultation “with appropriate State, tribal, and local governmental entities, and members of the public” including all our key stakeholders.

The current bill is the culmination of a collaborative 10-year process led by the Alabama Hills Stewardship Group that gathered input from over 30 stakeholder and 40 different user groups. Feedback was received from a diversity of groups ranging from local government, conservation, chambers of commerce, local cattle ranchers, rock climbers and ATV riders.

This input helped direct the effort to explore a federally legislated designation and led to a final recommendation to designate 18,610 acres in the Alabama Hills, a National Scenic Area under the National Landscape Conservation System (NLCS), which will be the first-of-its-kind designation managed by the Bureau of Land Management. National Conservation Lands are the nation’s newest class of protected lands, established in 2000 to “conserve, protect, and restore…nationally significant landscapes that have outstanding cultural, ecological, and scientific values for the benefit of the public”. The BLM has been a supportive partner with the AHSG, the local Tribe and the Lone Pine community throughout their 12-year relationship. This designation will protect both the spectacular landscape and the various user groups’ access to the Alabama Hills.

Chris Langley, past president of the AHSG and current Inyo County Film Commissioner states “The Alabama Hills Stewardship Group appreciates Congressman Cook’s passion and commitment to serving his constituency in Inyo County. He has proven he can listen, learn and lead on issues that are important to conservation and our local economy. In addition, we are thankful that Senator Dianne Feinstein, has been an ardent sponsor of our legislation, since the beginning of our grassroots effort.”

The Alabama Hills Stewardship Group, Inc. (AHSG) is a local group of Owens Valley community leaders whose goal is to aid, advise, monitor, inform and protect the Alabama Hills by assisting the BLM in their ongoing management of the area. The group was recognized in 2008 with a “Cooperative Conservation Award” from the US Department of the Interior and in 2011 with a “Vision Award” by the Sierra Business Council.

The Alabama Hills rise from the desert and provide a scenic backdrop for the community of Lone Pine, California. For thousands of years, the area has been continually used for subsistence, habitation and ceremonial purposes by the indigenous people known today as the Lone Pine Paiute-Shoshone Tribe. The Alabama Hills have inspired legendary landscape photographers Edward Weston, Ansel Adams and David Muench. Nearly 100 years of film history exists in the Alabama Hills from silent movies to state-of-the-art motion pictures such as Gunga Din, How the West Was Won and more recently Ironman and Django Unchained. The Museum of Western Film History located in Lone Pine, CA, and visited by thousands of people each year, contains extensive film history displays featuring the Alabama Hills.

The AHSG, Inc. is committed to protecting the jaw-dropping beauty of this semi-primitive landscape with continued access for hikers, motorists, photographers, rock climbers and campers as well as allowing important economic activities like commercial filming, cattle grazing, hunting/fishing and recreation to continue. Balancing all these needs is what makes the Alabama Hills so special to so many people and necessitates its protection.

The California Desert Protection and Recreation Act is the culmination of over five years of work in Congress by Rep. Cook, as well as over a decade of work by supporters on the ground. This landmark legislation creates the first national system of Off-Highway Vehicle Recreation areas and designates or expands six Off-Highway Vehicle (OHV) Recreation Areas in the California desert. These are Johnson Valley, Spangler Hills, El Mirage, Rasor, Dumont Dunes, and Stoddard Valley. This bill creates additional protections for OHV users and ensures that these areas cannot be closed by a future administration. The established or expanded OHV areas would total approximately 200,580 acres. Combined with the nearly 100,000 acres that make up the existing Johnson Valley OHV Recreation Area, this bill will ensure that over 300,000 acres are open permanently for OHV use in the California Desert.

This legislation also designates approximately 18,000 acres of existing federal land as the Alabama Hills National Scenic Area. This restricts large-scale projects such as renewable energy generation, while preserving all existing recreational and commercial uses of the Alabama Hills. Activities such as filming, hiking, mountain biking, rock climbing, hunting, fishing, and authorized motorized vehicle use are unaffected.

This bill designates or expands approximately 77 miles of wild, scenic, and recreational rivers in the San Bernardino Mountains and near Death Valley. It prohibits the development of renewable energy generation facilities on approximately 28,000 acres of Bureau of Land Management land near “Juniper Flats” outside of Lucerne Valley and conveys 934 acres of BLM land to the State of California to be included in the Anza-Borrego Desert State Park. It also directs the Secretary of the Interior to negotiate with the California State Lands Commission on land swaps involving state school lands within the California Desert Conservation Area and establishes a Desert Tortoise Conservation Center along the California-Nevada border.

Rep. Cook said, “It’s been a long process to get to this point, but this is truly a model for how grassroots legislating should work. This bill had widespread support from local governments, recreational groups, and conservation groups, as well as significant bipartisan support. It was a great honor to see President Trump recognize all of this hard work by signing S.47 into law today. I thank President Trump, my colleagues in the House and Senate, and most importantly all of those people on the ground who worked tirelessly to get a compromise bill that we could all be proud of. This is a huge legislative victory.”

Yay! I don’t get it. Trump wants to destroy some national landmarks. he creates others. My head is spinning

IJMO, you’re kidding, right? You think Trump had anything to do with this, other than the final signature? What the heck is wrong with you? How do you allow one person to negatively impact your entire life to the degree Trump has on your life? Good lord, if Obama had… Read more »