By News Staff on March 23, 2015 in Government Agencies/Utilities

On Saturday, March 21, 2015, the Mineral County Sheriff’s Office, in Hawthorne, NV, received a 911 call regarding a hiker who had broken their leg in a fall near Matterhorn Peak, approximately 15 miles southwest of Bridgeport in the Sawtooth Mountain Range. 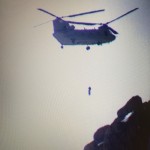 The 911 call was transferred to Mono County Sheriff’s Office Dispatch but was terminated due to the hiker’s poor cell phone reception. Attempts to re-establish contact with the hiker was unsuccessful so the exact whereabouts of the hiker were unknown. At approximately 3:40pm, Mono County Sheriff’s deputies were dispatched to Mono Village at Twin Lakes where the hiker’s vehicle was located at the trailhead used for access to the Matterhorn Peak area. 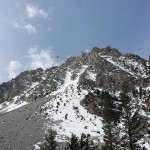 The Mono County Sheriff’s Search and Rescue (SAR) Team, and a California Highway Patrol (CHP) helicopter out of Auburn, CA, was dispatched to aid in the location search and rescue of the injured hiker. Due to high winds, the CHP helicopter had limited capability of searching the peaks and valleys above 12,000 feet, so a larger helicopter was requested. Just prior to dark, a rescue helicopter from Fallon Naval Air Station reached the search area and located the hiker at approximately the 10,000 foot level on a steep slope just below the crest of a ridgeline known as “The Cleaver,” two miles north of Matterhorn Peak. The Navy helicopter tried numerous times to lower a medic to the hiker but was unsuccessful due to high winds, the steep slope angle and darkness. 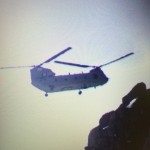 That evening, Mono SAR personnel began hiking to the injured hiker’s location. A larger helicopter, and assistance from the Inyo County Sheriff’s Search and Rescue Team, was requested for Sunday morning, March 22. While SAR personnel were climbing to the hiker’s location, a California National Guard CH-47-F Chinook helicopter from Stockton, CA, was able to lower a crewman to the hiker’s location and hoist them into the helicopter. The hiker was flown to Bryant Airfield in Bridgeport and transferred to Mono County Paramedics. The medics then transferred the hiker to Careflight for transport to Renown Medical Center in Reno for further treatment of their injuries.

The CH-47-F helicopter was one of ten delivered to the National Guard in December. This rescue was the first one for this model. New equipment on this model was a critical component in the helicopter being able to rescue the hiker in high altitude, windy conditions and a steep slope location. The helicopter pilot was able to use new ‘hover hold’ features to maintain a precise position near the cliff face during the extraction operation.

Other agencies providing valuable assistance in obtaining and coordinating military resources used in this rescue were the California Office of Emergency Services (CalOES) and the Air Force Rescue Coordination Center in Langley, Virginia.

Well done Co B! CA can always count on you for high altitude rescue missions.