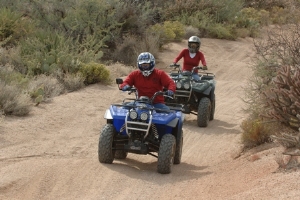 With a legislative bill in place for an Off Highway Vehicle pilot project, Inyo officials and citizens have gone public with information and opinions. Tuesday night the Bishop City Council hosted public comment on what’s called the Adventure Trails System.

Assembly Bill 628 establishes a pilot project for Inyo County roads in all of the towns to be used for regular vehicles and Off Highway Vehicles. Local government is now in the process of environmental reviews of the proposed dual-use roads. Bishop Public Works Director Dave Grah said local roads from near the White Mountains would come into town and arrive at Golden State Cycle, the Fairgrounds, Bishop Chamber of Commerce and Pizza Factory.

Maps will be available showing routes around Inyo towns as part of the environmental review. All motor vehicle codes apply to the OHV use on local roads. Tuesday night, most members of the public who spoke up favored the project, but some expressed concerns.

Darla Hile lives on Hanby St., which is an included route. She said while she is not against the OHV project, she is opposed to channeling of OHVs on to Hanby which is already a very busy street with lots of residents. Nils Davis and Lani Lahigh said yes to the project and pointed to economic gain. So did Greg Smith, who said Bishop Police could get grant money for extra patrolling of the OHVs.

Sam Blum called the pilot project an opportunity that could be huge. He said he would like to see more city streets opened to OHVs. Andrew Sherrit called the project important economically but said grants for police could dry up. He said the project could be 100% feasible without directing more traffic through heavily populated areas. Sherritt said routes should be more heavily scrutinized to end up at actual services.

Alan Pietrasanta, a frequently vocal supporter of economic development, said this aspect of the OHV project is important, but he asked the City to do some research and find out the pluses and minuses of similar projects in other states.

Inyo County is the lead agency for environmental review of this pilot project. The County issued a Notice of Preparation of an Environmental Impact Report. The County’s initial study indicates the potential for significant adverse environmental impacts or requirement of mitigation.

Scoping meetings are set for Thursday, October 24th at the Board of Supervisors Room in Independence at 6pm and Wednesday, October 30th at the Bishop City Council Chambers at 6pm. The purpose of the meetings is for presentation of views on what environmental information should be addressed in the EIR.

Looks like the exagerated apocoliptic views of atv riders is running full speed ahead. To start with i know tabbose cr. And from the campground theres a dirt road that takes you to the foothills of the siearras, from there its hiking trail and some real tough trail at that.… Read more »

I don’t think there is a bright side. I’d watch for what we wish for on this one; We can’t be everything to everyone. But we do have more recreation oppertunities then most.

Eastern Sierra is dual sport territory, and not so much green sticker friendly.

Mark…..That’s one of the things I’ve been saying….great !!…..just what we all need up here….easy access for the So Cal’ers and out of towners to get from bar to bar on the trails,neighborhood roads and the pavement….and then after a day or two of drinking,hop in their vehicles and drive… Read more »

As usual Wayne, you paint with a VERY wide brush. MOST dirt bikers (ALL the ones that I associate with) stick to the trails, wanting to go where they lead to. Sure, there are the “outlaw” riders, but as you already know, there are bad apples in EVERY barrel. Another… Read more »

I would agree that “most” off roaders behave responsibly. And yes, there are bad apples in every barrel. It’s just like everything else in life, it’s a matter of numbers. In any given activity I would say that roughly 10% of the participants will act irresponsibly. If we have 100… Read more »

After riding all weekend I still do not see enough open trails for this to draw many people. Still might be a good way to bar hop from town to town,,

Douglas….Let’s face it….saying “nix to this project”, it seems we are definitely in the minority to this view…..and ya know why ?…..some are seeing this “trail project” as bringing more $$$$ into the Owens Valley(which it won’t),and that’s about it…not looking at anything else.,and looking past all the pitfalls it… Read more »

Wayne, I don’t know if your image of things will really come true. Just want to say that while it’s not helpful to make money the exclusive, motivating factor in things (look what’s happened to our society today), it’s necessary for our small businesses to stay afloat.

Benett…..I hope your right….Maybe I see it the way I do because of growing up in Lancaster and the Antelope Valley in the late 70’s and 80’s when dirt-biking became popular…and the negative effects it had on a lot of things…turning pristine areas into race-tracks and dust-bowls going well beyond… Read more »

I believe there are dual-use roads proposed for each community. Will check on that. Thanks, Wayne.
BK

Wayne is right. cops in cars or trucks can’t catch dirt bike riders and they can’t be identified because they are not required to display visible license plates. Riders are already making a mess of hiking trails. I camped next to a dirt biker at Taboose creek last yer. He… Read more »

A dirt biker took off for the Sierra summit from Taboose creek? Maybe so. However the public road “Combined Use Routes” are where the serious safety and liability issues reside. With the new delay, till Jan 22, there is time to go explore all these combined use routes and have… Read more »

Wayne, Your statement: “it is hard to believe CHP certified as safe for such combined use” points up a fundamental misunderstanding of what this vote is about. The combined use on these roads already exists. If one follows through with your request to ride the roads, they will not have… Read more »

If this does go through….IF…….will be intresting to see if the area gets some of those little groups of “guy-guy’s” riding around and looking for trouble like they had in NYC a few weeks ago,surrounding a vehicle,forcing them to stop, breaking their windows,and then attempting to pull the driver,passenger,and child… Read more »

I support this project 100% however with the forest service and FOI’s attack on dirt trails once off the pavement there are very few actual loops to ride.

I live on part of the route and I am really happy it is going to happen. We will be one of a few people in this country that can hop on our toys and just go. Anybody want to buy a trailer?