By News Staff on January 18, 2012 in Government Agencies/Utilities 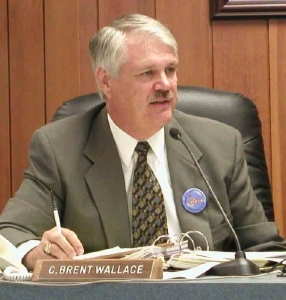 He was a somewhat controversial county administrator for Inyo and as administrator in other locations, but some have called C. Brent Wallace competent, forward thinking and kind. According to internet reports, Mr. Wallace has died.

Tuolumne County news reported the passing of Wallace and said that there was a moment of silence for Wallace at this week’s Tuolumne Board of Supervisors meeting. Reports said Mr. Wallace’s cause of death was not noted.

Sierra Wave received a Facebook posting that was attributed to Inyo Supervisor Susan Cash. She wrote that Wallace was CAO when she was hired in 1993 as a Correctional Officer for the Sheriff’s Department. Cash said she always found Wallace to be “a fair and kind man.” Later, Cash said, when she joined the Inyo Supervisors, Wallace was Executive Director of the County Administrative Officers Association. She said she worked with him on certain planning matters that helped strengthen Inyo’s organization.

Wallace served as administrator in Siskiyou County after leaving Inyo in the late 90s. Shortly after that, he moved on as administrator in Tuolumne County. During his tenure in Inyo, department heads privately reported that Wallace had a temper that frequently flared. He was viewed by some as “controlling.” Wallace found similar controversies in Siskiyou County, but there were equally complimentary reports.

The Tuolumne County Mother Lode Round-up organization found Wallace to be very supportive of their event. They honored him with the 2006 Tuolumne County Sheriffs Posse Top Hand Award. That same year, Wallace went on to head up the County Administrative Officers Association of California.

Brent Wallace is believed to be survived by his wife, Marilyn, and other relatives. He was reportedly 65 years of age.