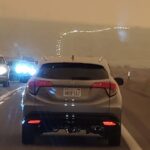 Multi-car crash Monday evening in Cartago. Hwy 395 closed for an hour both directions.

There was a multi-car crash reported on Monday evening, September 7, 2020,  in Cartago.

At least one person, (later identified as Richard Hanson of Bishop, Calif., age 80) driving a 2001 tan Land Rover, was reported as seriously injured after a traffic collision involving two other vehicles The accident happened along Highway 395 in Cartago, Calif., north of Crystal Geyser at Lone Willow Dip in Inyo County.

The Accident happened along Highway 395 in Cartago, Calif., north of Crystal Geyser at Lone Willow Dip in Inyo County.

Traffic ahead of Hanson had come to a stop due to two lanes merging down into a single southbound traffic lane. Due to Hanson’s unsafe speed, (estimated about 60 to 70 mph) he was unable to stop his vehicle in time and collided with a black 2009 Chevy Silverado pickup truck, driven by Jessica Juarez-Valenzl of Phoenix, Ariz., age 29. This collision caused the Silverado pickup truck to get pushed forward into a grey 2019 Toyota Yaris, being driven by Jesse Mendoza of Lancaster, Calif., age 32.

Hanson, the driver of the Land Rover, was transported to the Southern Inyo Hospital for treatment of major injuries, which included cracked ribs, pneumothorax, and laceration to the face. The drivers of the other two vehicles were reportedly not injured.

The California Highway Patrol Dispatch Office said officers received a call about the accident at around 7:43 p.m.

The highway, both northbound and southbound, was closed for an hour because of the collision. The CHP is investigating the accident.

This collision is currently under investigation.

When driving U.S. 395, Its not if you are going to be involved in an accident, but when, most dangerous this Highway has become a horrible situation everyday of the week, when will it be fixed? as a Local it is a near miss every time you travel on 395.

Bishop has looked like a NASCAR track lately. Big trucks, little trucks, cars, people towing trailers. Everyone speeding. I wish HCL had a back way out so I would not have to go out on Main Street.

Here we go again , bashing anyone that doesn’t live in the Eastern Sierra. “Respect for it’s residents” ??? Respecting “OUR” 395 , via speed limit and no passing ??? The CAUSE of this accident was an octogenarian who happens to be a resident of BISHOP ! We all know… Read more »

I would believe that widening the section of 395 between the 4 lanes South and North of Olancha would be much more important “safety wise” than narrowing Highway 168 from Bishop to Manor Mkt. causing traffic jams. The area around Olancha has been a death trap for years.

Bad stretch of highway. Any updates on when the widening project will begin?

My thought is this has less to do with widening that stretch to prevent these traffic tragedies. It is respecting the speed limit and ‘no passing’ ? Just my opinion. Too many tragic accidents & a lack of respecting our 395 from speedsters regardless of the widening of our highway… Read more »