By News Staff on June 25, 2012 in Government Agencies/Utilities 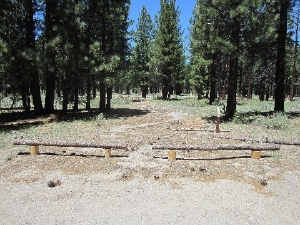 After we reported that unhappy citizens had begun to tear out Forest Service barricades on dirt roads in many areas, we received comments on our website expressing more concern.

The Mammoth Motorcycle Club wrote that they believe the Forest Service has refused to go out into the Forest to validate public concerns expressed over closed roads.  The Club representative spoke of feeling disheartened.  He said, “The signage, barricades, and blocked historical access to lost destinations and camping have gone too far….” 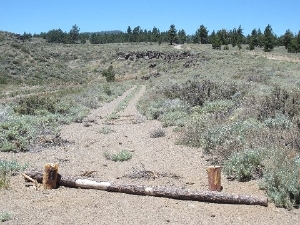 Disgruntled recreationists apparently took down this closure near Mammoth.

Another man said he drove to the Bachar Boulders area across from June Lake Junction and suddenly came upon a barrier on the road he had used for decades.  He said, “I nearly hit it.”  This man wanted to know why the Forest Service had closed a “benign, well-established road.”

Others have expressed concern about the two-foot high timbers that now block about 400 roads in Mono County and 200 in Inyo.  Some asked what will happen this winter when snow covers the timbers and snowmobiles try to travel.

Forest Officials maintain that the “tremendous growth in off-highway vehicle recreation on public lands” led to the decisions to close roads and re-arrange travel on forest lands.

With summer recreation time underway, locals who have traditionally used dirt roads to reach camping and hiking areas report that their long-familiar roadways are blocked by timbers.

Marty Hornick, trails coordinator for the Forest Service said he and others welcome call and contacts from citizens with concerns over what is called the new Travel Management Plan.  See Forest officials’ names and contacts below:

a bit of an exaggeration

More government-bashing Tourbillon?
Try turning off Limbaugh and settle down a bit.

Big AL
Reply to  a bit of an exaggeration

Ohhhh Dr. Facts .. you were being a good boy .. what happened? you jonseing again?

Problem is more than just closing roads. A government that behaves with such nonchalant disregard for the overwhelming majority and instead chooses to cater to – and pay – accomplice special interest groups soon loses the allegiance of its people, and with that its authority (as has already happened as… Read more »

Are you kidding me? This Travel Management Plan has been in the news constantly for at least 4 years, if not longer. For two years, the Forest Service begged everyone who uses Forest roads to ID those roads so they could be assessed, mapped and addressed. Then the maps were… Read more »

Explain why the USFS, specifically JON KAZMIERSKI, refuses to release the map of all the closures to the public??? They have to learn the hard way by running into a closure. At the last public meeting in Mammoth, KAZMIERSKI refused to allow any questions or answer them. He was speifically… Read more »

You have got to be kidding Jon .. people responded to your requests for comment .. but you disregarded that comment, but regarded the “other people”. We know how it works, and we will get the word out for you on how discriminating the Forest Service has been about this,… Read more »

So, now, after not paying attention or being part of the process for several years people are surprised that roads are being closed? No sympathy. Guess you didn’t read my post, Jon? Was on the team that negotiated the roads for TMP and went to every meeting that was held.… Read more »

Here is the final Final Awards 2009/10 Grants and Cooperative Agreements Restoration Projects. They had requested $662.521.00 and received $603.000.00 http://ohv.parks.ca.gov/pages/1140/files/final%20awards%20restoration.pdf Also When the Friends of the Inyo were requesting funds, It appears that some of the board of directors were writing support letters to the California State Parks OHV.… Read more »

Your OHV dollars at work.

On the “Friends Of the Inyo” web site, they are begging for small donations from the little people yet no where do they mention that they are taking in hundreds of thousands of dollars a year from the USFS. They appear to be a contractor for the USFS. If so,… Read more »

According to Marty Hornick, FOI received a grant of around $600,000 and they are using that to work on road closures
under the supervision of the USFS.
BK

Yep .. deception Truth Seeker, but more than that .. it is a very well laid plan to recruit. You make your plea for money .. and oh yeah .. what ever you can give, or even better yet .. what you can do to help, by action … The… Read more »

Where is this so called “tremendous growth in off-highway vehicle recreation on public lands” that has led to the decisions to close roads and re-arrange travel on forest lands? Having worked for years with the forest on the Travel Mngmnt Plan, I can tell you it is all smoke and… Read more »

Good post Greg, and a point in your post .. law enforcement … We’ll just hire more law enforcement .. it’s a shame that the forest service is becoming more about law enforcement, and less forest rangers. more of that control issue. What’s behind the tip of that ice burg,… Read more »

So Greg, I am confused…are you reneging on the CAT agreement you signed in ’08? To quote from the CAT proposal (which you signed): “No CAT member or group received all they wanted; that is the spirit of compromise and a sign of measurable success. Again, the goal of the… Read more »

No, they weren’t “very well represented” at all. Tell me, which one of your CAT members rode a dirtbike???? I guess that would be Dana Stroud? LOL! Even the FS agrees that dirtbike users were VERY under represented (if at all). Sorry, but it’s true. FYI: Mr. Sauser isn’t too… Read more »

“trails coordinator for the Forest Service said he and others welcome call and contacts from citizens with concerns over what is called the new Travel Management Plan.” Then they do what the please with complete public disregard. With more OHV users then ever existing roads should remain open. (and perhaps… Read more »

Forest Officials maintain that the “tremendous growth in off-highway vehicle recreation on public lands” led to the decisions to close roads and re-arrange travel on forest lands. So their decision is to shut it down so only people that can walk can see the back country. This is discrimination of… Read more »

We are in historical times right now, in budget cuts, consumption, and wasting federal tax dollars. How does the USFS have so much money to just throw out there, with little or no good outcome. Its rediculous, I mean why pay taxes when the Fed’s can just print money? And… Read more »

We are in historical times right now, in budget cuts, consumption, and wasting federal tax dollars. How does the USFS have so much money to just throw out there, with little or no good outcome. Its rediculous, I mean why pay taxes when the Fed’s can just print money? And… Read more »

This wilderness thing has gone to far, look at the recent lawsuit by The Center for Biological Diversity. Despite the fact the legislator approved a bill allowing off road vehicles drive on public roads with restrictions and the measure was support by the local community, a lawsuit is filed to… Read more »

Jenny B
Reply to  Bret

According to the “UN Global Biodiversity Assessment” unsustainable constructions and targeted activities include golf courses and ski runs. The UN wildlands project states the wilderness should be without roads. What will the friends of Inyo be pushing for next closing mammoth mountain. The need that grant money to support their… Read more »

Thank you for the contact information .. and @ truth Seeker, very good points made.

Benett, Thank you for covering this story on Sierra Wave – even though it seems rather insignificant, considering the terrible news about the June Mountain Ski Area, and the distress it brings to our friends and family that live and work in June Lake… With your permission, I would like… Read more »

“news”? or spin from a special interest group?^^^

Well, I must admit… I am interested in riding my motorized cycle, and I am involved in a group that likes to ride as well. So if that makes me involved in a special interest group then so be it. What are you interested in? If you don’t like the… Read more »

Thanks for posting links to you’re propaganda site, supporting the continued destruction of our wilderness. You talk a lot about the money funding FOI, so let’s hear where MMC gets it’s funding. Come on, fess up. Or should I do the dirty work?

HAHAHAHAHAHA! Go head Milfred, expose us! If you actually took the time to read our “meeting minutes (before sticking foot in mouth),” you’d know exactly where the funding comes from. Go ahead, Columbo, do the dirty work! HAHAHA! You know, Milfred, not every group is attached to Uncle Sam’s teat.… Read more »

Hey Wilfred, I did some sleuthing and found this in MammothMC’s meeting minutes from March: “$562 was carried over from 2011, at the Zranch the following members re-upped for 2012: Russ, James, Joe, Junior, and Sam. We thank them for being proactive and renewing. Renewals are now taking place until… Read more »

How about the “”Friends Of the Inyo” post on their website how much money they are making closing roads in and around their communities? How much will they be paid to put the closures back up that are torn down? What percent of the FOI budget comes from putting up… Read more »