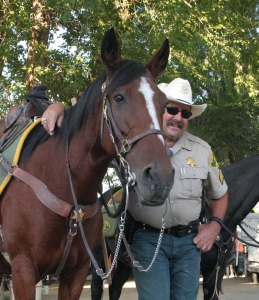 The Mono County Sheriff’s Office is saddened to report the loss of one of our mounted team members, Abby, the Mustang Police Horse. Abby had a 17-year career span as a mounted patrol horse with partner Lt. Phil West.

Abby was a former wild mustang, foaled in 1991, and gathered from the BLM Herd Management ‘Area 52,’ near Tonopah, NV. Abby came to Lt. Phil West in 1992 from Officer Rich Perkins of the Bishop Police Department. In the spring of 1994, after Lt. West lost his first mustang police horse, Modoc, Abby went into training to become the replacement horse. Abby became a familiar face in the Eastern Sierras with the inter-agency Eastern Sierra Mounted Enforcement Unit, working details from Lone Pine to Bridgeport and gathered thousands of loving strokes from citizens and visitors in the course of her career.

Abby’s career with Lt. West spanned 17-years. She began with the Bishop Police Department (1994-2002) and continued and ended with the Mono County Sheriff’s Office (2002-2010). Abby accompanied Lt. West to the California Peace Officers Memorial from 2003-2010. She was retired in 2006 and worked only a few details a year, as her replacement, Bigun (also a former wild mustang) was taking a larger portion of her workload. Abby was fully retired in 2010 with Bigun taking over all of her law enforcement related duties.

In addition to working mounted patrol, Abby had her shot at stardom and was featured on BLM’s, “Wild Horse Trading Cards,” and on the Discovery Channel’s, ‘Animal Planet.’ She was also a family companion and pet, involved with Lt. West’s children in various horse shows and high school rodeo events. Sometimes, these events would occur on the same day as mounted details where she would compete and then change demeanor for working the street later that same day. Abby was ‘sent up to heaven’ on Saturday, October 19, 2013 due to complications of Cushing’s Syndrome. Abby was an integral member of the Mono County Sheriff’s Office Mounted Unit and will be greatly missed.

“Abby was an ambassador for and a true testament to the mentality of the wild horses. She was a family companion, show and competition horse, in addition to her law enforcement duties. I can best describe Abby as resolute in action yet gentle in manner. Our family misses her greatly and would like to thank the Eastern Sierra communities for their support throughout the years that she served.” –Lt. Phil West

We work to provide daily news to all of the Eastern Sierra, in the tradition of Eastern Sierra News Service and the Sierra Wave. We bring you daily happenings, local politics, crime, government dealings and fun stuff. Please contact us.
View all posts by News Staff →
USFS campgrounds wind down after shutdown
Caltrans reports on lane closures for the week

I am sure Abby is in a better place.

My condolences to the West family, Abby looks like a very sweet and well loved horse, I’ll bet she never spoke a foal word. I hope your grief passes quickly and that your next partner and friend is just as great.
Mongo