By News Staff on December 18, 2013 in Government Agencies/Utilities 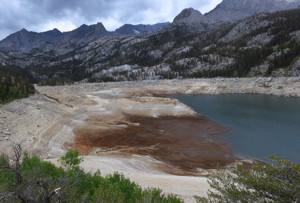 As wells go dry in West Bishop, one resident, Philip Anaya, has launched an effort to impact the management of the Bishop Creek drainage next summer.

Anaya read a letter to the Inyo Supervisors on Tuesday that he has sent to Department of Water and Power Manager James Yannotta. Anaya’s goal is recovery of South Lake and Lake Sabrina, which both nearly dried up last summer and seriously impacted businesses in that area.

Anaya wrote that the recovery of the lakes is “held by both the Edison Company and DWP.” Anaya said in communications with Supervisor Rick Pucci the idea developed to do something about the lakes and the environmental and economic impacts.

Anaya said he knows that this winter’s snowpack and spring runoff will affect the whole situation, but he hopes that management of the release of waters will also make a difference. Anaya calls for allowing the lakes to fill to the “highest possible elevation and then manage releases with all the needs of the concerned entities considered.”

The letter to DWP Manager Yannotta asks him to take the initiative and reach out to interested parties and to gather ideas and comments on lake management. Anaya wrote, “If there could be a shared successful solution, it might become a template to resolve other issues that we spend so much time confronting each other instead of cooperatively finding solutions.”

Anaya planned to talk about his ideas at the Thursday Bishop Chamber of Commerce Board meeting.

Mr Yannotta , I am finding support in the Community for recovery efforts of South and Sabrina Lakes. I am certain that you will be receiving communications from the Community. With great respect I provide you here, what I think might be at the very least an acceptable response to… Read more »

The 2 decade drought in the Southwest is ongoing. It will get worse. Pumping the maximum water allowed from the Owens Valley will only exacerbate the local conditions and eventually LADWP will not be able to provide the water necessary to it’s customers in L.A. What then? Will you continue… Read more »

At a LA Inyo Co. Technical meeting the empty lakes and the Chandler Decree were discussed. I asked about past practices of allowing a variance on the Bishop Creek Drainage Mr. Yannotta said the DWP could not ignore the Chandler Decree they (DWP) had to take the amount of water… Read more »

Mr .Yannotta, A snow pack of 120% of normal might help with the recovery of South and Sabrina Lakes and I never would give up hope for that . The Chandler Decree does not intend, mandate or require emptied Lakes . With all the environmental and economic impacts from this… Read more »

Bennett: Good luck getting a reply. That question has been asked many times…No answer.

The following information is being provided in response to the December 18, 2013 story that appeared in the Sierra Wave news, “A Plea to Manage Lakes:” LADWP does not manage South Lake or Lake Sabrina. Southern California Edison (SCE) stores water in these two lakes and the 1922 Court-ordered Chandler… Read more »

As in my earlier request, what about the fact that Edison has reported asking DWP in successive years to approve a variance in flows for the health of the lakes, ditches and ponds? Edison officials told us that last year DWP refused two requests for variances.

1922. Don’t you think it’s time for a change in that court ordered decree? 92 years has pass. Things have changed. However, it sounds like you’re passing the buck Jim.