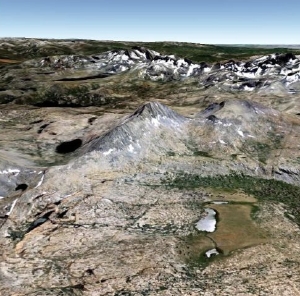 Mt. Andrea Lawrence is a 12,240-foot mountain peak in Mono County on the northern border of the Ansel Adams Wilderness and east of Yosemite National Park.

This month, President Obama signed the Mt. Andrea Lawrence Designation Act into law. Senator Barbara Boxer and Congressman Buck McKeon had introduced identical bills on this designation in honor of Lawrence who died in 2009.

Family members, local officials and environmentalists supported the idea of naming a mountain peak after Lawrence. In a press release, Senator Boxer said, “Andrea Lawrence dedicated her life to protecting the treasures of the Eastern Sierra. Her passion and achievements were larger than life, which is why I cannot think of a more fitting tribute than to name this majestic peak in her honor.”

Mt. Andrea Lawrence is a 12,240-foot mountain peak in Mono County on the northern border of the Ansel Adams Wilderness and east of Yosemite National Park. Accomplishments by Lawrence, as many locals know, include being a three-time Olympic winner and the only American double Olympic gold medalist in alpine skiing. She was inducted into the U.S. National Ski Hall of Fame in 1958 at the age of 25.

Sports writer and documentary filmmaker Bud Greenspan called her “the greatest Winter Olympian of all time.” Senator Boxer noted that Lawrence was also a committed conservationist who worked to protect and restore Mammoth Lakes, Mono Lake, Bodie State Historic Park and other important natural and cultural resources of the Eastern Sierra.”

Lawrence served as a Mono Supervisor for 16 years. During that time, she was instrumental as an Air Pollution Control District Board member in negotiating the agreement that led to the clean-up of the Owens Dry Lake.

Lawrence also founded her own Andrea Lawrence Institute for Mountains and Rivers to promote environmental protection and economic vitality in this region.