The 65th anniversary of an extraordinary event in the Owens Valley is Oct. 25. In 1944,students at Manzanar (relocation camp)high and junior high schoolsplayed 6-man football games against teams from Big Pine High.

Reviving the memory of these long-forgotten gameswas by Dr. John Dahlem, whose credits include: former CIF-Southern Section President, principal at Loara, Western and Savanna high schools, and teacher and legendarywrestling coach at Loara. Fulldisclosure: I was actually lucky enough to graduate from Loara (class of ’81) and have then Mr./Coach Dahlem as a teacher for Psychology and California History. He is a longtime friend of the Todd family (I’ve known him since I was 11) and he officiated the wedding of my brother Randy and his wife, Bonnie.

Dr. Dahlem is nowresident historian at the CIF-SS, andsome of his work canbe viewed at cifss.org, look under History.

The following is the account written by Dr. John Dahlem (it does not including certain excerpts from the Manzanar Free Press newspaper or the Manzanar yearbook):

Much has been written on Camp Manzanar which is today a National Historical Site located just north of Lone Pine on Highway 395. 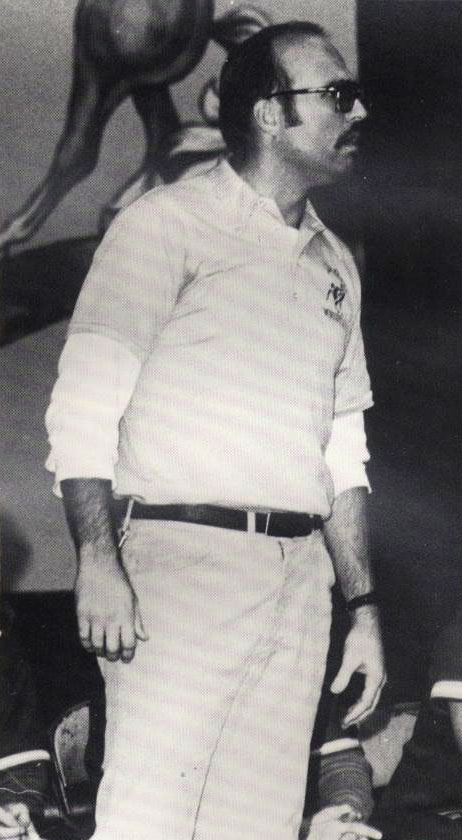 Manzanar (“apple orchard” in Spanish) was one of 10 relocation camps for over 110,000 Japanese Americans who were interned during World War II by Executive Order 9066. The camp was open from 1942 to 1945, and contained over 10,000 internees … it was one of the largest cites between San Francisco and Los Angeles during wartime California.

The plight of the internees was well documented in Jeanne and James Houston’s “Farewell to Manzanar: A True Story of Japanese American Experience During and After World War II Internment.

The story was made into a movie which continues to have an impact on the youth of California and the book is on the required reading list for all students.

Manzanar was a thriving city and education was an important component of daily life. It is estimated over 50 percent of the camp’s population took advantage of the educational opportunites.

Manzanar High School opened as soon as the internees arrived in 1942 with limited space, limited equipment, very few school supplies and staffed by teachers who were often not credentialed.

It was a very difficult situation for everyone concerned and the teachers were directed to “not allow the Japanese American child to become too absorbed in his misfortunes and feelingsof being the only object of prejudice in America.”

To cheer up the students of Manzanar, the high school was essentially modeled after the typical California high school with a lot of activities, including clubs, cheerleading, plays and probably most importantly, a comprehensive sports program.

The favorite sport was softball and practically all the students belonged to a boys or girls team. Volleyball was also very popular, particularly among the girls.

Indoor facilities were not available until the auditorium was completed in 1944. Basketball was played outdoors on dirt courts and a golf course was built with sand putting greens.

Regulation baseball diamonds were built for “hardball” and money collections taken at the games to buy limited equipment. There were boxing clubs, track teams, tennis, weightlifting, speedball and over 100 individuals involved in wrestling.

Finally, in 1944, “a two-year-old dream became a reality” (from Manzanar High School Yearbook 1944-45, the “Valediction”) as the football team “ably coached by Mr. Smith, marched on to the gridiron to meet the stalwarts from “up the valley” (Big Pine High School).

The “Valediction” gave the following result: “After a see-saw back and forth on the field for an hour and half, the ‘cardinal and gold’ (Manzanar High School colors) lads proved their superiority by coming out on top with a 33 to 0 score. In the preliminary, the Junior High School boys, coached by Tadaomi Marumoto, also were victorious, 25 to 0. Bishop High School was slated as the next victim, but due to unfortunate circumstances the game was cancelled.”

Two schools during very difficult times remembered what true sporsmanship and “Pursuing Victory with Honor” is all about. Big Pine High School continues as a viable member of the California Intescholastic Federation Southern Section (CIF-SS) and an important competitor in the Hi-Lo League. Manzanar High School is long gone, only a memory to those young internees who spent their formative years there and tried to live a normal life.

The couple hours of normalcy on oct. 25, 1944 will live forever in the hearts of the courageous boys from “Up the Valley” and those incredible Manzanar High School Students who deserved much better from all of us.

On April 25, 2009, almost 65 years since that wonderful football game, the CIF-SS Executive Committee voted unanimously to grant an honroary membership to the cardinal and gold of Manzanar high School, forever a member of the CIF-SS.

Thanks to the men of the 1944 Big Pine Warrior football team and the black-and-gold clad men of Manzanar High School.”

Thanks, Dr. Dahlem, for a great story.

The Los Angeles Times printed an article on Monday about this competition, with longtime prep writer Eric Sondheimer gleaning this information from Dahlem:

“A side note: Manzanar was scheduled to play its second interscholastic event, a basketball game against Bishop. But a few hours before Manzanar was to leave for the game, the Bishop school board refused to allow its team to play. That prompted the Bishop student body president, Mickey Duffy, to write a compelling letter of apology to the Manzanar students.

“When we were informed that the game with your basketball team had been canceled, we did our utmost to change the school board’s decision through a petition signed by the entire student body,” Duffy wrote.

“It has been taught to us in school that a democracy and Constitution such as ours guarantees every American equal treatment. Certain members of the board, however, refused to acknowledge our efforts.”

We work to provide daily news to all of the Eastern Sierra, in the tradition of Eastern Sierra News Service and the Sierra Wave. We bring you daily happenings, local politics, crime, government dealings and fun stuff. Please contact us.
View all posts by News Staff →
Federal and State Charges in Yosemite Poaching Case
Eastman Wants More Action on Grand Jury Recommendations