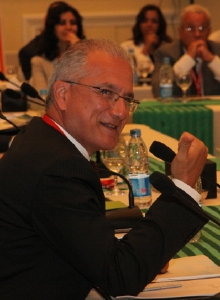 We have all seen the frightening images on television news of the tumult and severe unrest in Egypt, the demand for President Mubarak’s resignation, the strong emotions of the people there and the unpredictable swell of people. Wednesday, we had the privilege to speak to a man in Cairo to find out, on a personal level, what it’s like.

Emad Hassan is a friend of Rick Phelps, director of the High Sierra Energy Foundation and Mammoth area resident. Mr. Hassan is an energy efficiency consultant and had worked with Phelps in the past. Hassan was born and raised in Egypt, spent time in the United States and now lives in Cairo with his wife and two children. When I spoke with him, he was preparing to leave temporarily because of the frightening conditions – banks are closed, the stock market closed, everything is closed and the food supply is in question.

I first asked Mr. Hassan what he’s seeing and how he feels about it. He said things are moving fast and it’s hard to know where it’s headed. He said it all started at the end of January with a peaceful demonstration by a mix of Egyptian people – young and old, men and women, educated and uneducated. Hassan said it was all fine up until the police pulled out of the streets.

“That created a sense of fear for the average citizen,” said Hassan. “When they don’t have any police presence on the street.” Hassan said President Mubarak gave a speech to answer to protestors. Wednesday, Hassan said, many other demonstrators showed up, claiming to support the President. “A clash erupted between the two camps and to my surprise there was no intervention by police or security. The bottom line is it’s pretty scarey. In about seven or eight days, the situation has gone from the most peaceful city in the world to almost living in the Twilight Zone.”

Why does he think this has happened to his country and his city? “Honestly speaking, there are a lot of people that have really felt there was inequality in wealth distribution for a long time.” Hassan said it all blew up with the internet movement – Facebook, Twitter. “All these things have created almost a community on line that started sharing ideas. This is mostly the age bracket of 25 to 35. They’re well educated and they wanted to present themselves in a fashionable manner. Some other groups infiltrated these demonstrations and started to over-politicize things.”

Hassan believes outside entities have changed the dynamic of the demonstration. I asked Hassan what living conditions are like in Egypt. He said there are 80 million people and that in his personal view about 20% live comfortably, 60% are trying to make ends meet and 20% are below the poverty line. “They’ve been able to live together for the longest time, but apparently,” said Hassan, “with everyone seeing everyone else and the world becoming almost one village, things changed.” Hassan said it’s hard for people below the poverty line seeing people driving around in fancy cars and living in luxurious homes in the same city.” Hassan said the internet has created a community in which to discuss things. “I think it’s good. It allows people who were disengaged in their political lives to jump into it.”

The internet and cell phone service have been shut down in Cairo since January 27th. They were just restored Wednesday. Where will things go from here? Mr. Hassan said, “To be honest with you if you had asked me that question 24 hours ago, I would probably have said things would subside and go towards quieter times. Today I can’t tell you. Really, it’s moving by the minute. The dynamics are so fast and so strange that one can’t predict anymore.”

Hassan said everything is closed and the food supply in serious question. “It can get uglier,” he said.

(Our thanks to Mr. Rick Phelps for the contact with Mr. Hassan and his personal view of this enormous world event.)

We work to provide daily news to all of the Eastern Sierra, in the tradition of Eastern Sierra News Service and the Sierra Wave. We bring you daily happenings, local politics, crime, government dealings and fun stuff. Please contact us.
View all posts by News Staff →
Restaurant owner offers reward to help solve crime
Eastside This Week: dance, think, craft!