BODIE HILLS PINYON CREEP: Is it worth spending big bucks?

A few weeks ago, my Letter to the Editor about BLM’s plans to manipulate 16,000 acres in the Bodie Hills was focused on 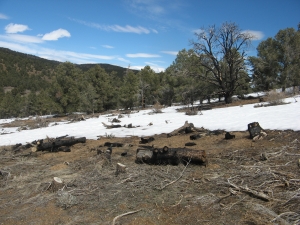 letting people know about the project and how to send in comments. Since then, I have read the study results from the experimental plots done in 2007, visited the “treatment” sites, and given it all more thought. Here are the concerns I will mention in my comments to BLM.
I would be happy to take anyone interested on a tour of the test plots, this SUN. APRIL 10 at 1pm. Meet at Hwy 395 and Hwy 167, 7 miles north of Lee Vining. More info, call me at 760-647-6431.
Wear boots and long pants and bring your 4WD vehicle.

THIS PROJECT NEEDS AN ENVIRONMENTAL IMPACT STATEMENT
The scope is huge. Wilderness Study Areas are of special concern and perhaps should not be massively manipulated. The research is not conclusive on benefits gained. More study time is needed in the experimental plots. Three years is not enough data.

COST
According to the reports provided by BLM , the cost of “mastication” (chewing up existing vegetation with a huge machine) is $738 per acre. Cut, pile and burn (crew with chainsaws cuts down trees, piles them up and later burns the piles) is $439 per acre. Using a conservative average of $500 per acre, this project of 16,000 acres over 10 years will burn through 8 MILLION DOLLARS. Is cutting down healthy trees because they are increasing their range due to fire suppression and warming temperatures, among other things, really the best use of this public money?

BENEFIT
BLM has 2 reports available on the experimental plots. One, conducted by Point Reyes Conservation Science, looks at birds in the plots. After a 3 year study (2 dry years and one wet) the results are inconclusive. There were more nesting birds and better nesting success in the untouched control plots than in the treated areas, according to BLM’s own report.
The other report is about vegetative response to the treatments. Again, things are inconclusive. The best results overall are in the areas where the pinyon forest was not dense to begin with. Here is the link to the report: http://www.firescience.gov/JFSP_Search_Results_Detail.cfm?jdbid=%23%27J%278%0A

FIRE SAFETY
BLM has told us that local communities will be safer from fire by “treating” thousands of acres. The fact remains, however, that most of the area proposed to be manipulated is far from communities. I asked a BLM official in 2007 , “Why don’t you spend this money to reduce fuel load near communities where it is really needed, not in a place 5 miles from the nearest houses?” His answer (paraphrased) If we start thinning near towns, everyone wants us to do their place, and if we don’t, they might sue us if a fire comes. It’s easier to do this stuff where there aren’t a lot of people.
How about putting some of those millions into a firebreak around the town of Bodie, or buying a new fire truck for Bodie, or upgrading the fire hydrant system at Bodie?

A MORE REASONABLE APPROACH?
After visiting the test plots today, it seems that a more reasonable approach would be to focus on areas at the edge of the pinyon forest, where the trees are scattered . It would be possible to cut down the small pioneering trees on the edge of the sagebrush scrub, much like trees are thinned in Yosemite to maintain desired meadows. To cut down healthy trees on thousands of acres to return them to sagebrush, when oceans of sagebrush surround Mono Lake, seems to be a hopeless task and a waste of money. Obviously, the natural prevailing conditions are favoring the pinyon trees. As I said before, the trees are a carbon sink and we are lucky our pinyons aren’t dying en masse like those in Arizona.
Sage grouse habitat can be targeted and perhaps some pinyon removal and prescribed burns done in the most important areas.

We work to provide daily news to all of the Eastern Sierra, in the tradition of Eastern Sierra News Service and the Sierra Wave. We bring you daily happenings, local politics, crime, government dealings and fun stuff. Please contact us.
View all posts by News Staff →
Eastside This Week: More Music, Raising Chickens, and Best Friends
No seat belts contributed to a traffic fatality