To Eastern Sierra residents, in most years, annual run-off means the streams and canals rise and pasture lands start to green-up. For Los Angeles Department of Water and Power, run-off is the city’s life’s blood, the calculation that figures into the department’s operations for the next 12 months. 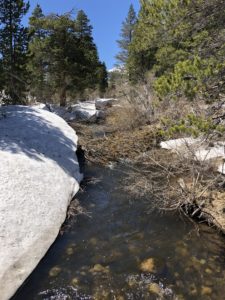 So, how do they figure it out? Eric Tillemans, LADWP engineer, gave the Inyo County Board of Supervisors a beginner’s course in Run-Off 101 at a recent meeting. Here’s how it works.

Snow pillows are located at each of the major water shed points, Gem and Mammoth Passes, Rock Creek, Sawmill, Big Pine Creek and Cottonwood Lakes. The pillows send the weight of the snow on top of them via satellite to the Department of Water Resources in Sacramento. The snow pillow reports are then put on Water Resources’ website.

More important than the pillows are the three snow courses at the same locations and the eight to 10 measuring points down the length of those courses. The first of February, March and April, LADWP staff trek up to the pillows, stick hollow rods into the snow at the measuring points and weigh the snow-packed rods to determine water content.

Each of the crests contributes a specific percentage to the total run-off into the Owens River, so after the April 1 trip into the mountains, the department staff is ready to predict run-off.

But, it’s not that simple. According to Tillemans, precipitation and stream flow also figure into the final number with the final run-off number determined by a regression formula. Those formulas are determined by a statistical regression analysis of the variables, stream flow, precipitation and snow pack water content. The formulas are different for each water shed. The values for the variables are plugged into the formulas and out comes the run-off predictions for each watershed.

The reason the final run-off, 137-percent of normal, is lower than the snowpack, 171-percent, is almost logical. LADWP engineers assume “normal” precipitation during the not-rainy season. In high precipitation years, it’s usually safe to assume the precipitation will come to a screeching halt during spring/summer. Of course, this month’s rain/snow and lower temperatures threw a wrench in that pattern.

In early January, Tillemans said the volume was average. Then six weeks later, snowfall hit 268-percent of average sending crews to the department’s spreading grounds to make sure they were ready to accept the anticipated volume. The effort wasn’t as great as the scramble two years ago when spreading excess run-off hadn’t been an issue during the five previous years of drought.

High flows in the Owens River is still a possibility, he said. But the department knows what to look for and can alert Inyo Sheriff’s Department if those flows are an issue.